Household living arrangements around the world vary by religion, according to a new Pew Research Center study. Still, certain broad patterns are true of women and men regardless of the religion they affiliate with. On average, women are younger than their husbands or male cohabiting partners across each of the six religious groups evaluated in the study – and in each of the 130 countries and territories analyzed. Women also are more likely than men to age alone and to live in single-parent households.

Here is a look at these patterns in more detail:

Across religions and regions, women are younger than their male partners 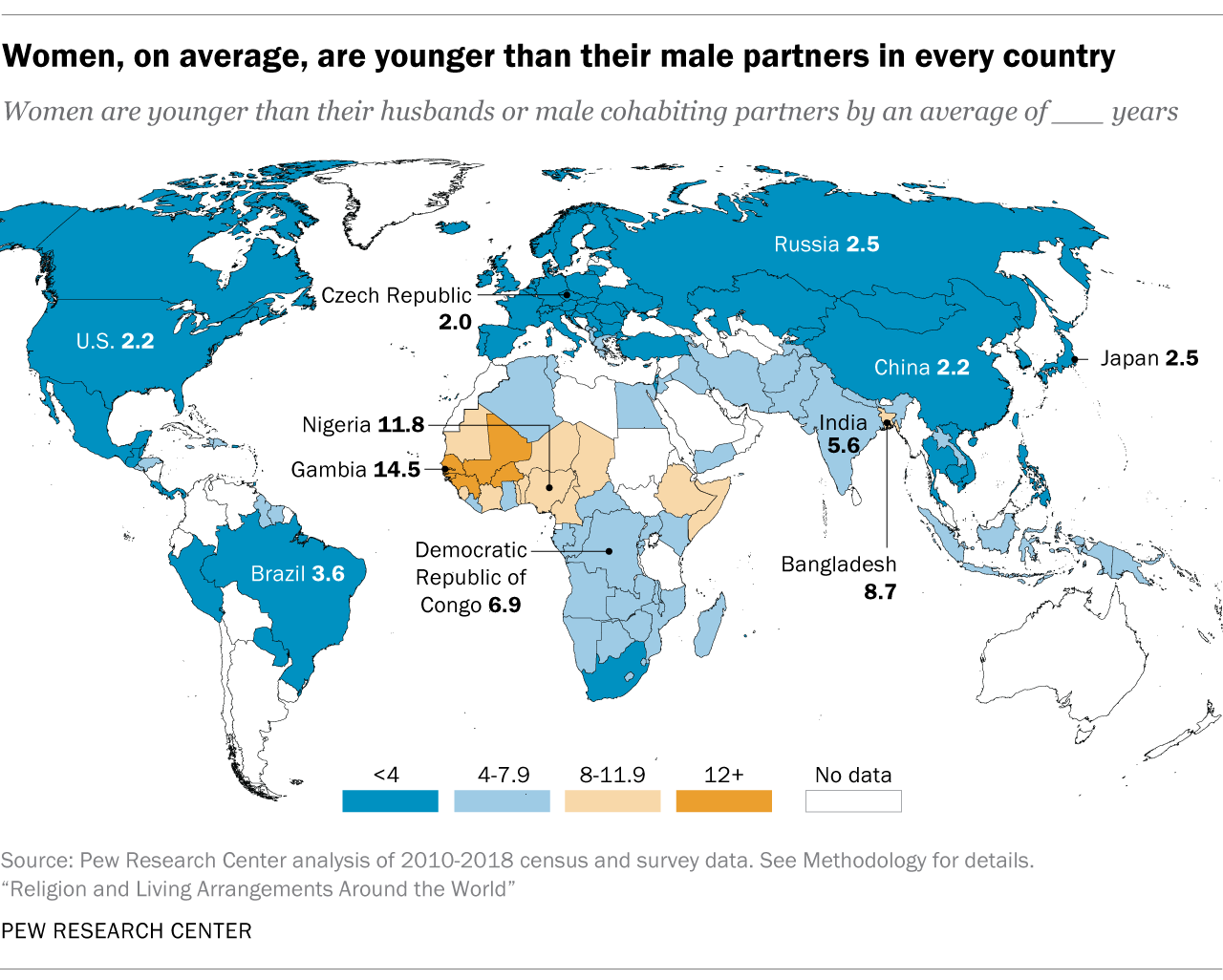 Large age gaps are especially common in sub-Saharan Africa, including in Gambia (14.5 years between men and their wives or partners), Guinea (13.5) and Mali (12.9). There are much narrower gaps in European countries such as the Czech Republic (2.0), Slovakia (2.1) and Estonia (2.2) – though the United States and China (both 2.2) also are notable examples of small gaps.

Within individual countries, the size of the spousal age gap can vary by religion. For example, Christian men in Nigeria are 9.2 years older than their female partners, on average, while Muslim men are 13.0 years older. Nigeria’s population is about half Christian and half Muslim.

The pattern of spousal age gaps – and the fact that women tend to live at least a few years longer than men – helps explain another universal theme: Across the world, women are about twice as likely as men to age alone. One-in-five women ages 60 and older live in a solo household (20%), compared with one-in-ten men (11%). 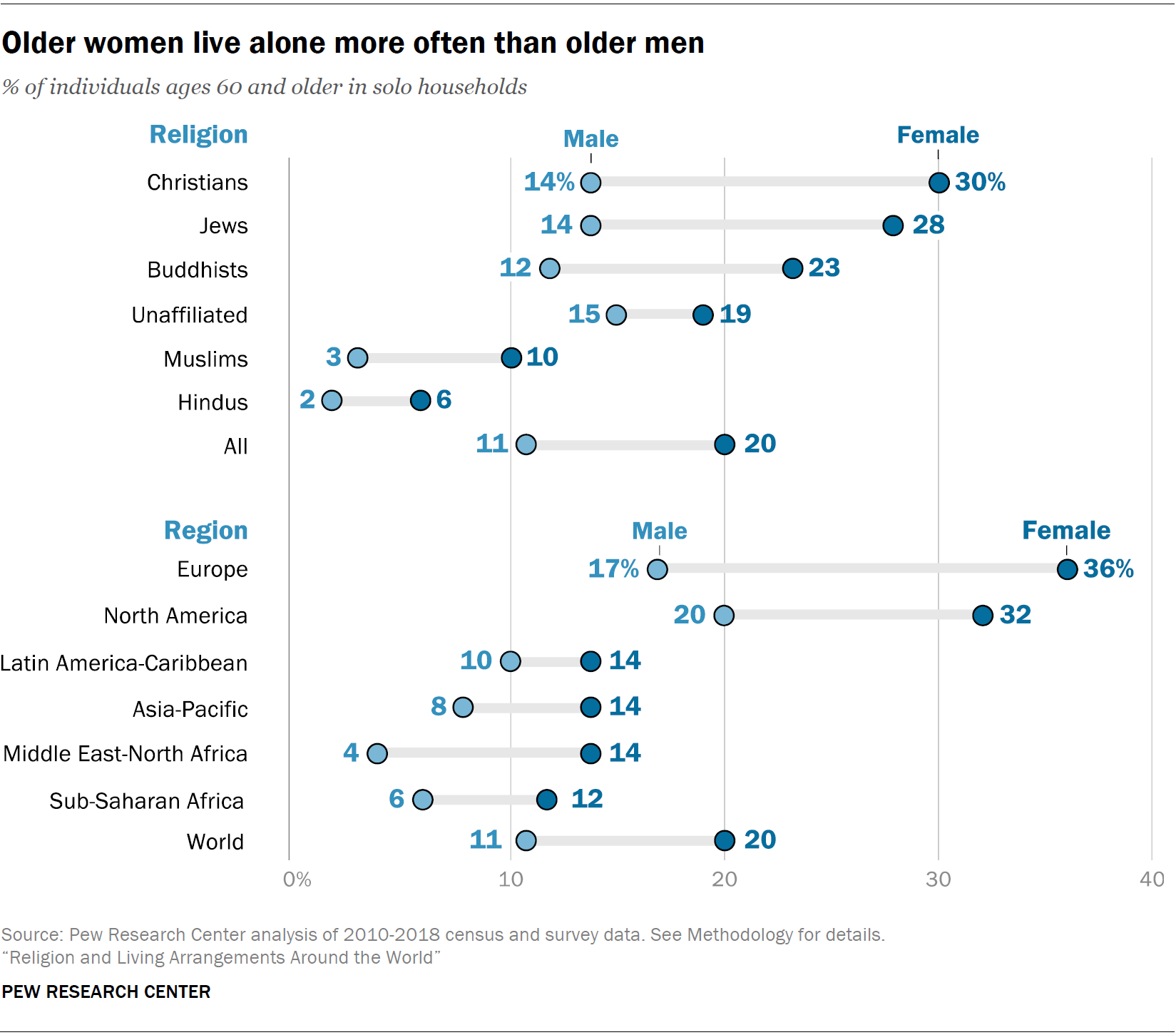 While this pattern holds across all six religions evaluated, there are again differences between faith groups. Christians have the widest gap in rates of living alone (30% of Christian women live alone, vs. 14% of Christian men), though Jews also have a wide gap (28% of Jewish women vs. 14% of Jewish men). The differences are smaller but still noticeable among the religiously unaffiliated (19% of women vs. 15% of men) and Muslims (10% of women vs. 3% men). Relatively few Hindus live alone, regardless of gender (6% of women vs. 2% of men).

By region, Europe and North America have the widest gender gaps in rates of living alone. In both places, roughly one-third of women ages 60 and older live alone (36% in Europe and 32% in North America), compared with roughly one-fifth of men (17% in Europe and 20% in North America). The gaps are smaller in other parts of the world, including in Latin America and the Caribbean, Asia and the Pacific, the Middle and North Africa, and sub-Saharan Africa, all regions where the rate of older women living alone doesn’t exceed 14%.

Rates of living alone over the age of 60 are tied to many factors, including cultural norms, economic development, levels of education and life expectancy. In countries where governments offer fewer retirement benefits or other support systems for older adults, families may face a greater responsibility to provide care.

Women are more likely to be single parents

Across the world, middle-aged women (those ages 35 to 59) are also more likely than their male counterparts to live in single-parent households. 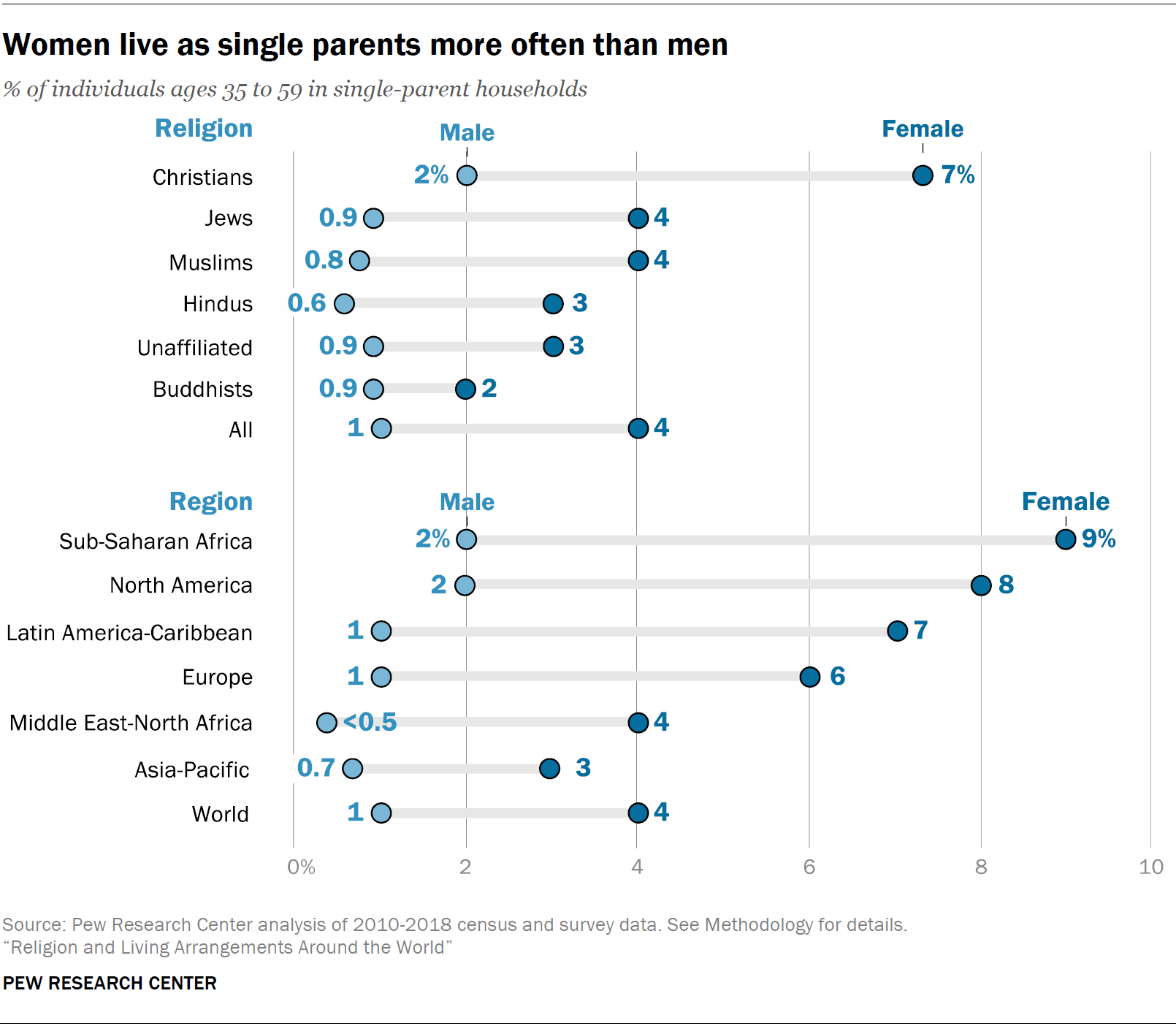 Globally, middle-aged women are four times as likely as men to live with one or more minor children and no other adults (4% of women vs. 1% of men). The gap is biggest among Christians (7% of women vs. 2% of men). Gaps are smaller but still notable among Jews, Muslims, Hindus and the religiously unaffiliated. However, Buddhist men and women do not differ much on this measure.

These patterns partly reflect the large share of Christians in sub-Saharan Africa, where single-parent households are relatively common, and the big shares of Buddhists in Asia, where such households are rare. In sub-Saharan Africa, 9% of middle-aged women and 2% of middle-aged men live in single-parent households, followed closely by North America (8% of women vs. 2% of men) and the Latin America-Caribbean region (7% of women vs. 1% of men). Middle-aged men tend to live in single-parent homes at about the same rate all over the world and regardless of religion; any differences in rates of single parenthood affect women almost exclusively.