As the People’s Republic of China celebrates the 70th anniversary of its founding, it gets mixed reviews from people around the world, according to Pew Research Center’s latest Global Attitudes survey. A median of 40% across the 34 countries surveyed have a favorable opinion of China, compared with a median of 41% who have an unfavorable opinion.

And, while majorities in most countries agree China’s influence on the world stage has grown markedly, this has not necessarily translated into favorable views of the country, according to the survey of 38,426 people conducted May 13 to Oct. 2, 2019.

Opinion of China across most of Western Europe is, on balance, negative. While 51% in Greece have a positive view of China, pluralities or majorities in all other Western European countries have an unfavorable view, ranging from 53% in Spain to 70% in Sweden. The share of people who evaluate China positively have also dropped by double-digits in nearly half of the Western European countries surveyed, including Sweden (down 17 percentage points), the Netherlands (-11 points) and the UK (-11). Only in Greece and Italy has opinion improved.

Negative views of China predominate in both the United States and Canada, where 60% and 67% respectively see the country unfavorably. In both countries, this is the highest unfavorable opinion of China recorded in the Center’s polling history. (For more on U.S. opinion, see “U.S. Views of China Turn Sharply Negative Amid Trade Tensions.”) It also reflects the largest year-on-year change in either country. For example, in Canada, unfavorable opinion increased 22 points in the wake of the high-profile arrest of technology company Huawei’s chief financial officer and the ensuing Chinese detainment of two Canadian nationals who still remain in Chinese custody.

China also receives unfavorable marks from most of its neighbors in the Asia-Pacific region. In Japan, 85% say they have an unfavorable opinion of China – the most negative among all countries surveyed. 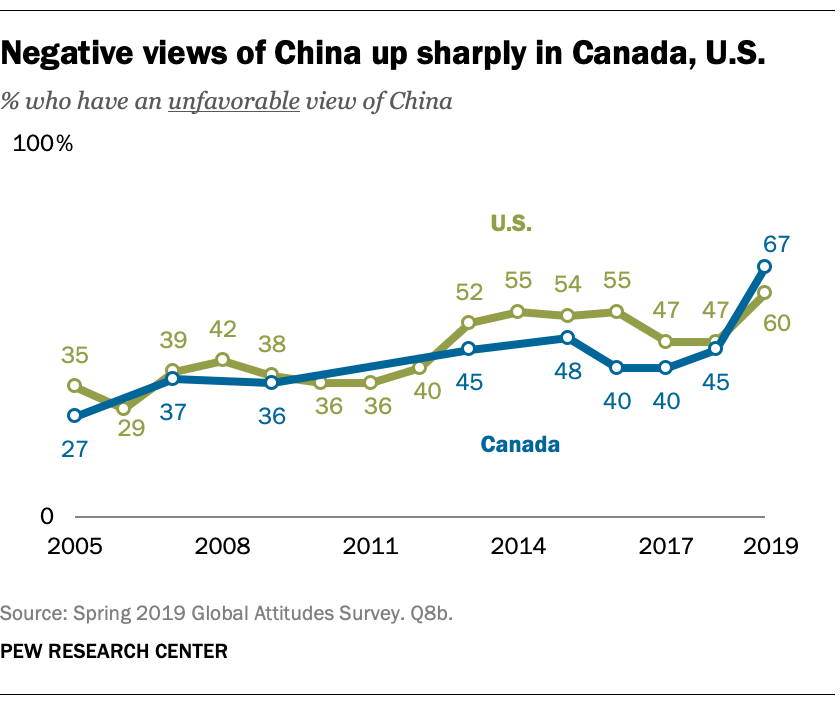 More than half in South Korea (63%), Australia (57%) and the Philippines (54%) share this sentiment. Opinion of China has also fallen across the region over the course of Pew Research Center’s polling and is now hovering at or near historic lows in each of the countries surveyed. In Indonesia, the change over the past year has been particularly stark, falling 17 percentage points.

Russians stand out for having the most positive view of China across all countries surveyed (71% favorable). A majority in Ukraine, too, share these views (57%). 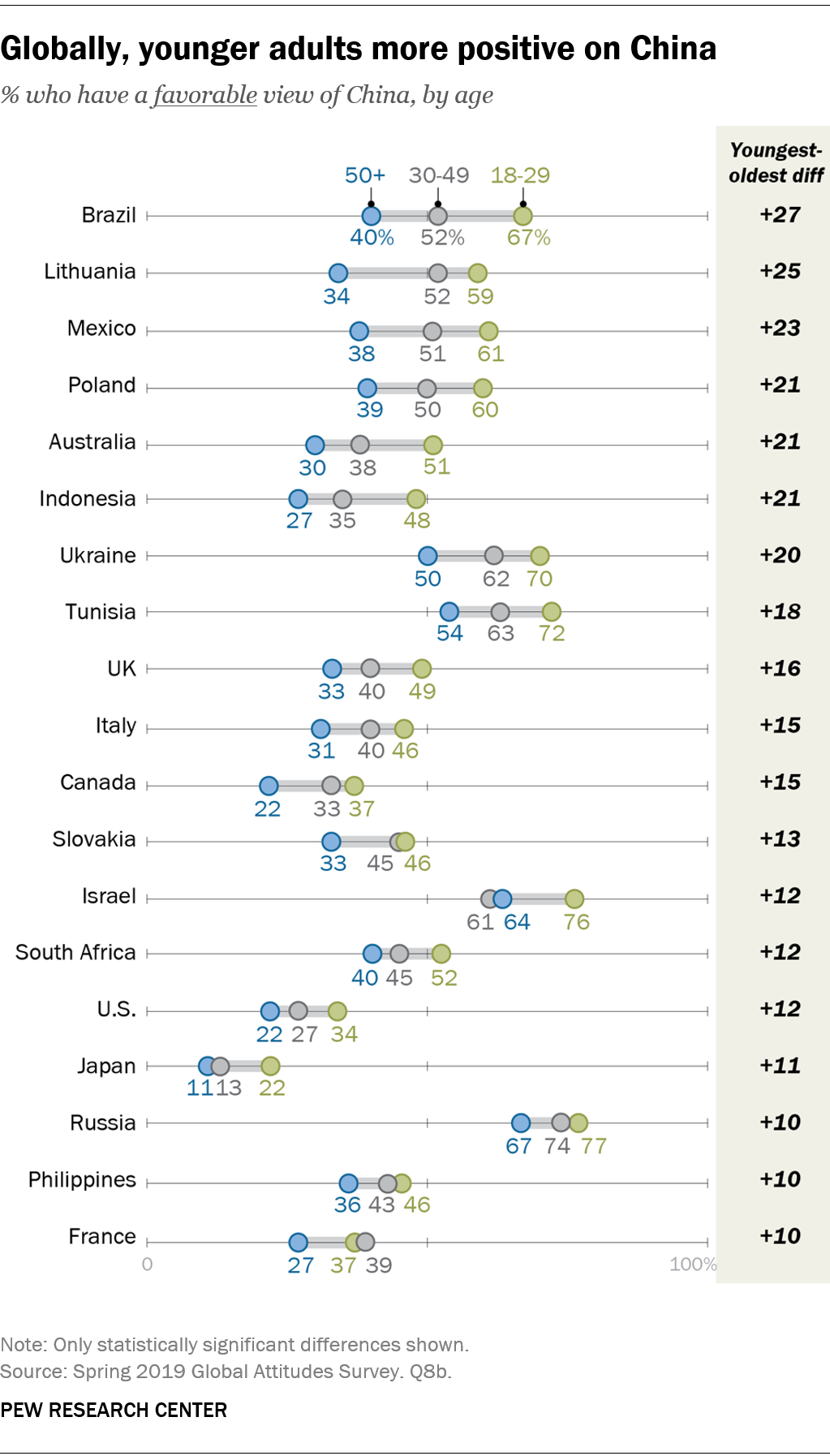 Majorities or pluralities in almost all the Middle Eastern, Latin American and sub-Saharan African countries surveyed have a favorable view of China, including 70% who have a favorable opinion in Nigeria.

Younger people tend to have a more positive stance on China across most of the countries surveyed. In 19 countries, adults ages 18 to 29 have more favorable views than those 50 and older. In Brazil, for example, two-thirds (67%) of younger adults have a favorable view of China, while just 40% of older adults share that opinion. Large age gaps also exist in Lithuania (where younger adults’ views are 25 points more favorable), Mexico (+23 points), Indonesia (+21), Australia (+21), Poland (+21) and Ukraine (+20).

However, in many countries, those 50 and older are also less likely to offer any opinion of China. About a third or more of older adults in Indonesia, India, Ukraine, Argentina, Mexico, Tunisia and Brazil give no opinion when it comes to China.

The data in this report and the accompanying topline, originally published Sept. 30, 2019, have been updated to reflect the inclusion of Turkey and India. Additionally, the final chart in this post has been updated to exclude Lebanon, which does not have a statistically significant age difference, and corrected values in the difference column. The changes due to these adjustments do not materially change the analysis of the report.