There is a partisan gap in the United States over how much the federal government should spend for scientific research. 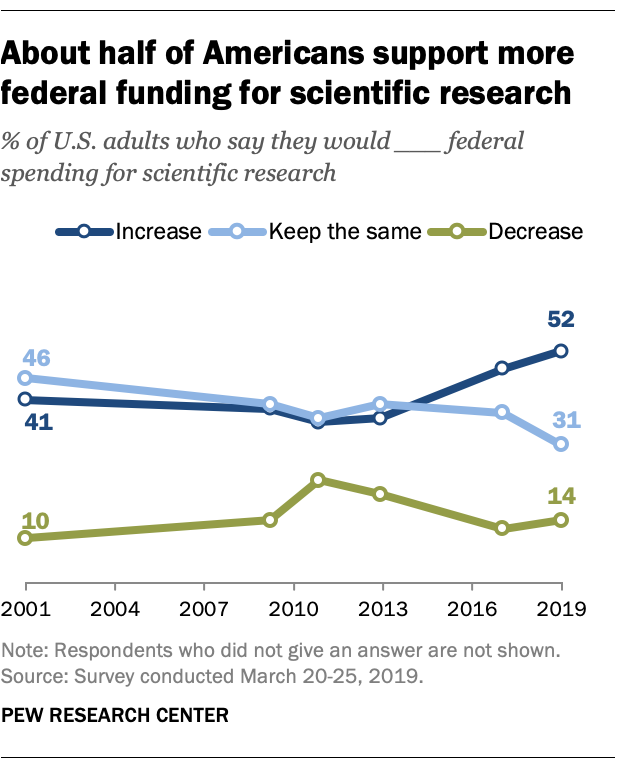 Overall, about half of U.S. adults (52%) say they would increase federal spending for scientific research, according to a Pew Research Center survey conducted in March, up 15 percentage points since 2013. Just 14% say scientific research funding should be decreased, while roughly three-in-ten (31%) think it should stay the same. 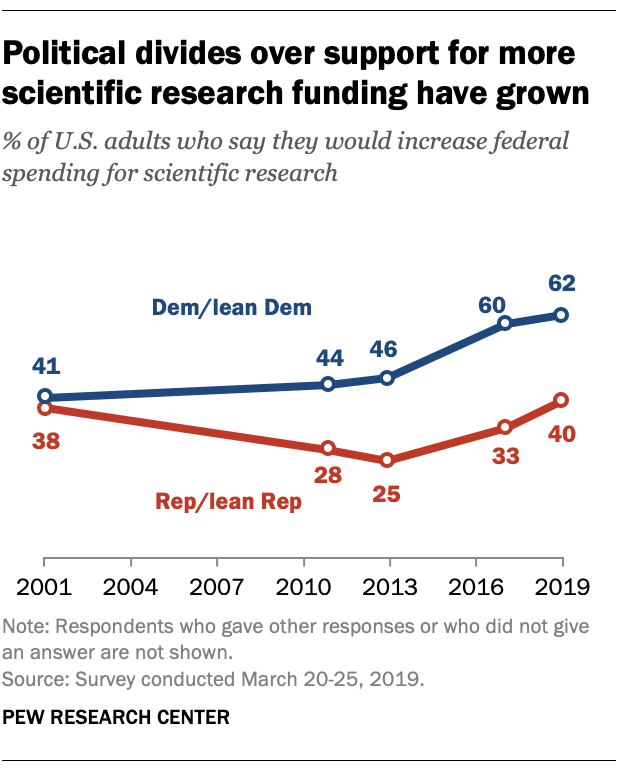 The partisan gap in views of spending for scientific research has grown over the long term. In 2001, there was no significant divide between the parties. In subsequent years, Republican support trended steadily downward before going up more recently. Democratic support remained relatively steady for more than a decade before rising significantly in a 2017 survey. The partisan gap in support for more federal spending on scientific research was 16 percentage points in 2011; it grew to 27 points in 2017 and now stands at 22 points.

Observers look to federal spending on research and development as a window into the nation’s science infrastructure. Federal and industry spending on R&D as a share of the gross domestic product – called “R&D intensity” – helps gauge the nation’s capacity for innovation. Such spending has been trending downward in the U.S., according to analysis by the American Association for the Advancement of Science. By contrast, R&D intensity has been rapidly increasing in other nations. As of 2016, the U.S. ranked 10th in national R&D intensity, trailing South Korea, Israel, Japan, Taiwan, Austria, Germany and others.

Scientific research is one of many areas – including veterans benefits, infrastructure, environmental protection and poverty assistance – in which a significantly greater share of the public now backs increased government spending than did so in 2013.

Correction: A previous version of this post misstated the number of programs for which Republicans were less likely than Democrats to favor increased government spending.

Note: This is an update of a post originally published on May 1, 2017. See full topline results and methodology.

Public Views About Science in the United States