Today’s kindergartners offer a glimpse of tomorrow’s demographics. The number of states where at least one-in-five public school kindergartners are Latino has more than doubled since 2000, according to a new Pew Research Center analysis of Census Bureau data.

In 18 states and the District of Columbia, Latino children accounted for at least 20% of public school kindergarten students in 2017 (the most recent year available), up from eight states in 2000. However, only two states – Massachusetts and Nebraska – and the District have joined this list since 2010, while one state (Idaho) dropped off. This reflects the fact that Hispanic population growth has slowed over the past decade or so due to a declining number of births and a decrease in immigration, particularly from Mexico.

At nearly 60 million, Hispanics are the nation’s largest racial or ethnic minority group. They make up 18% of the U.S. population and have dispersed across the country widely since the 1980s. The states where at least one-in-five kindergartners are Hispanic include some with historically few Hispanics, such as Massachusetts, Nebraska and Washington. 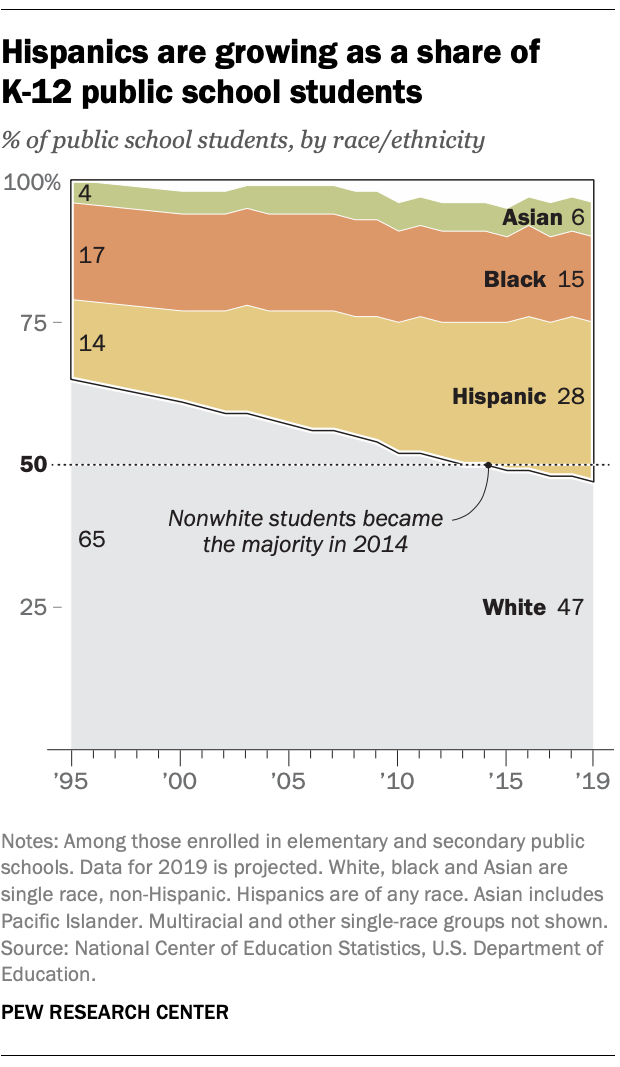 Today’s newborns also offer a glimpse into the nation’s future demographics. In 2018, more than one-in-four of the nation’s newborns were Hispanic. By 2060, Hispanics are projected to make up 27% of the overall U.S. population, according to Census Bureau projections from 2017.

More broadly, slightly more than half of all babies born in the United States today are a racial or ethnic minority, a threshold first crossed in 2015. Racial and ethnic minorities are expected to make up more than half of the total U.S. population in coming decades. They currently make up about 40% of the overall population, with the share projected to increase to 56% by 2060, according to Census Bureau projections. In 2018, there were five states – Hawaii, California, New Mexico, Texas and Nevada – plus the District of Columbia where minority groups made up more than half of the population.

Note: This is an update to a post originally published on July 8, 2014.