Many Americans say that religion is very important in their lives. But how much do people in the U.S. actually know about their faith tradition – or about religions besides their own?

A new report from Pew Research Center tries to answer this question by asking U.S. adults 32 fact-based questions about a variety of religious topics. The survey includes questions about the Bible and Christianity, as well as atheism, agnosticism, Judaism, Islam, Hinduism, Buddhism and Sikhism. Respondents also were asked about religious demographics.

The average U.S. adult is able to answer slightly fewer than half of the religious knowledge questions correctly (14.2 of the 32). But the survey finds that Americans’ level of knowledge varies based on who is answering the questions.

Before you read this

Test your religious knowledge by taking an interactive quiz. The short quiz includes some questions recently asked in the nationally representative survey that forms the basis of this report. After completing the quiz, you can see how you did in comparison with the general public and with people like yourself.

1Most Americans are familiar with some of the basics of Christianity, and even know a few facts about Islam. But fewer get questions right about Judaism, Hinduism or Buddhism. Eight-in-ten U.S. adults know that in the Christian tradition, Easter commemorates the resurrection of Jesus – rather than the Crucifixion, the Ascension to heaven or the Last Supper. A similar share know the Christian doctrine of the Trinity holds that there is one God in three persons – Father, Son and Holy Spirit. And six-in-ten know that Ramadan is an Islamic holy month and that Mecca is Islam’s holiest city. However, just one-quarter of Americans know that Rosh Hashana is the Jewish New Year. Roughly one-in-five Americans (18%) know that the “truth of suffering” is part of Buddhism’s four “noble truths,” and 15% correctly identify the Vedas as Hindu texts. 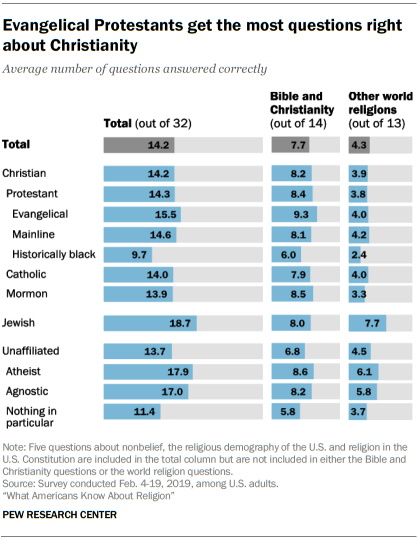 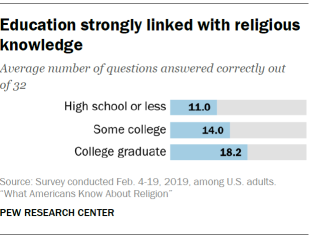 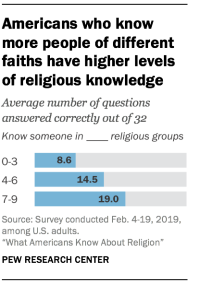 6Those who are most knowledgeable about religion tend to have favorable views of other religious groups. The survey asked respondents to rate nine religious groups on a “feeling thermometer” ranging from 0 (coldest and most negative) to 100 (warmest and most positive) and finds that those who score higher on the knowledge quiz tend to feel more warmly toward most religious groups. Buddhists, for instance, receive an average thermometer rating of 65 degrees from non-Buddhists who answer 25 or more religious knowledge questions correctly, compared with just 49 degrees from those who answer eight or fewer questions correctly.

U.S. Jews know a lot about religion – but other Americans know little about Judaism
Faithful Students?
Among religious ‘nones,’ atheists and agnostics know the most about religion
In U.S., familiarity with religious groups is associated with warmer feelings toward them
Q&A: The challenges of creating a religious typology