For the first time in modern history, the world’s population is expected to virtually stop growing by the end of this century, due in large part to falling global fertility rates, according to a Pew Research Center analysis of new data from the United Nations.

Here are 11 key takeaways from the UN’s “World Population Prospects 2019”: 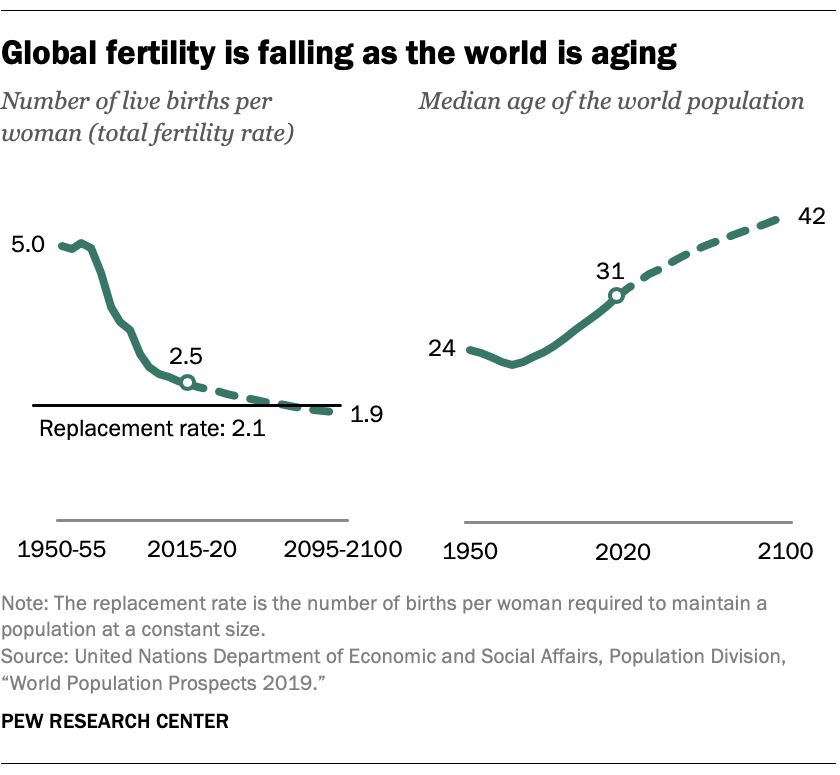 2The world’s median age is expected to increase to 42 in 2100, up from the current 31 – and from 24 in 1950. Between 2020 and 2100, the number of people ages 80 and older is expected to increase from 146 million to 881 million. Starting in 2073, there are projected to be more people ages 65 and older than under age 15 – the first time this will be the case. Contributing factors to the rise in the median age are the increase in life expectancy and falling fertility rates.

3Africa is the only world region projected to have strong population growth for the rest of this century. Between 2020 and 2100, Africa’s population is expected to increase from 1.3 billion to 4.3 billion. Projections show these gains will come mostly in sub-Saharan Africa, which is expected to more than triple in population by 2100. The regions that include the United States and Canada (Northern America) and Australia and New Zealand (Oceania) are projected to grow throughout the rest of the century, too, but at slower rates than Africa. (This analysis uses regional classifications from the UN and may differ from other Pew Research Center reports.) 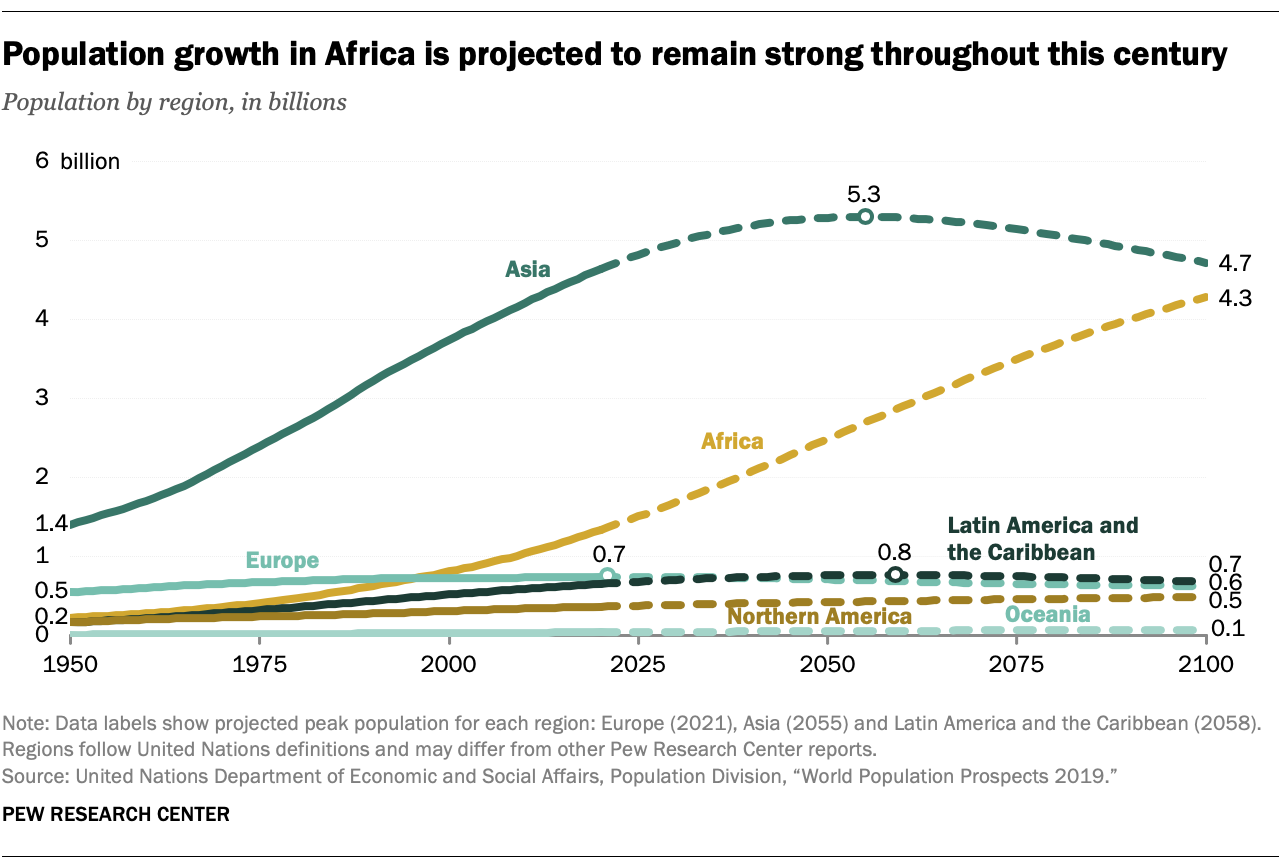 6In the Northern America region, migration from the rest of the world is expected to be the primary driver of continued population growth. The immigrant population in the United States is expected to see a net increase of 85 million over the next 80 years (2020 to 2100) according to the UN projections, roughly equal to the total of the next nine highest countries combined. In Canada, migration is likely to be a key driver of growth, as Canadian deaths are expected to outnumber births. 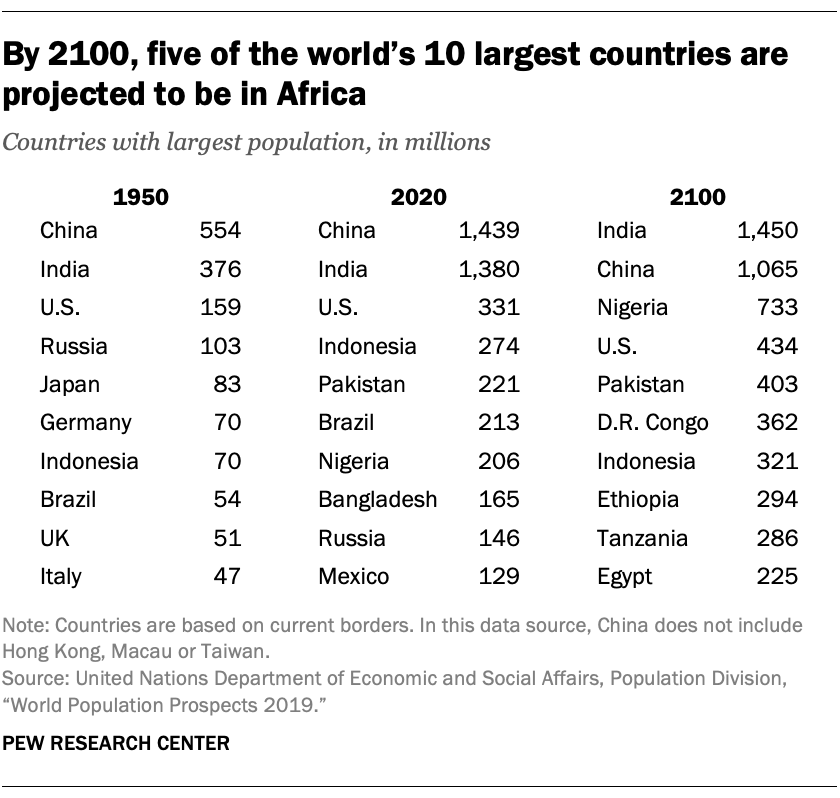 8India is projected to surpass China as the world’s most populous country by 2027. Meanwhile, Nigeria will surpass the U.S. as the third-largest country in the world in 2047, according to the projections. 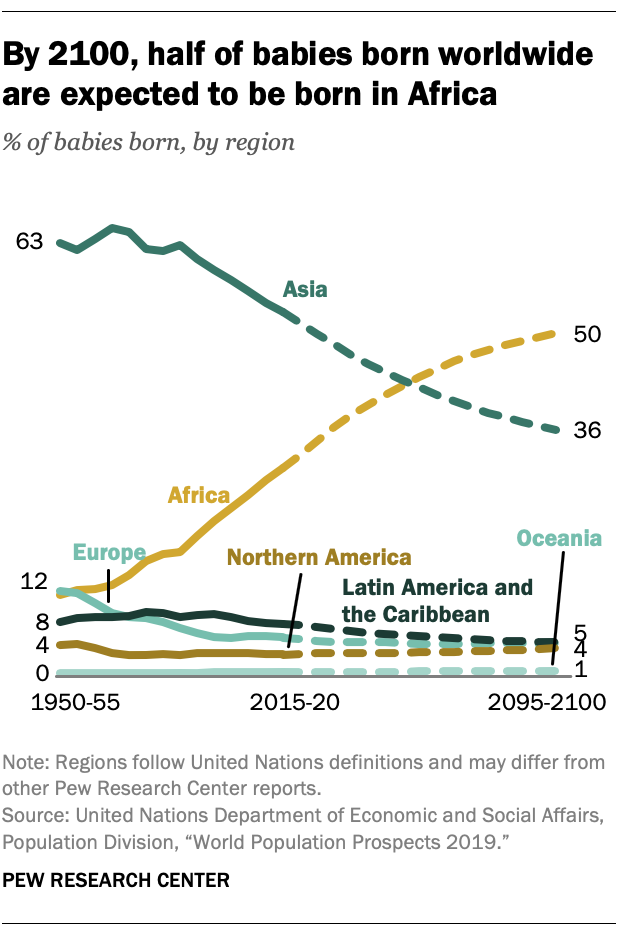 Meanwhile, roughly a third of the world’s babies are projected to be born in Asia by the end of this century, down from about half today and from a peak of 65% in the 1965-70 period. 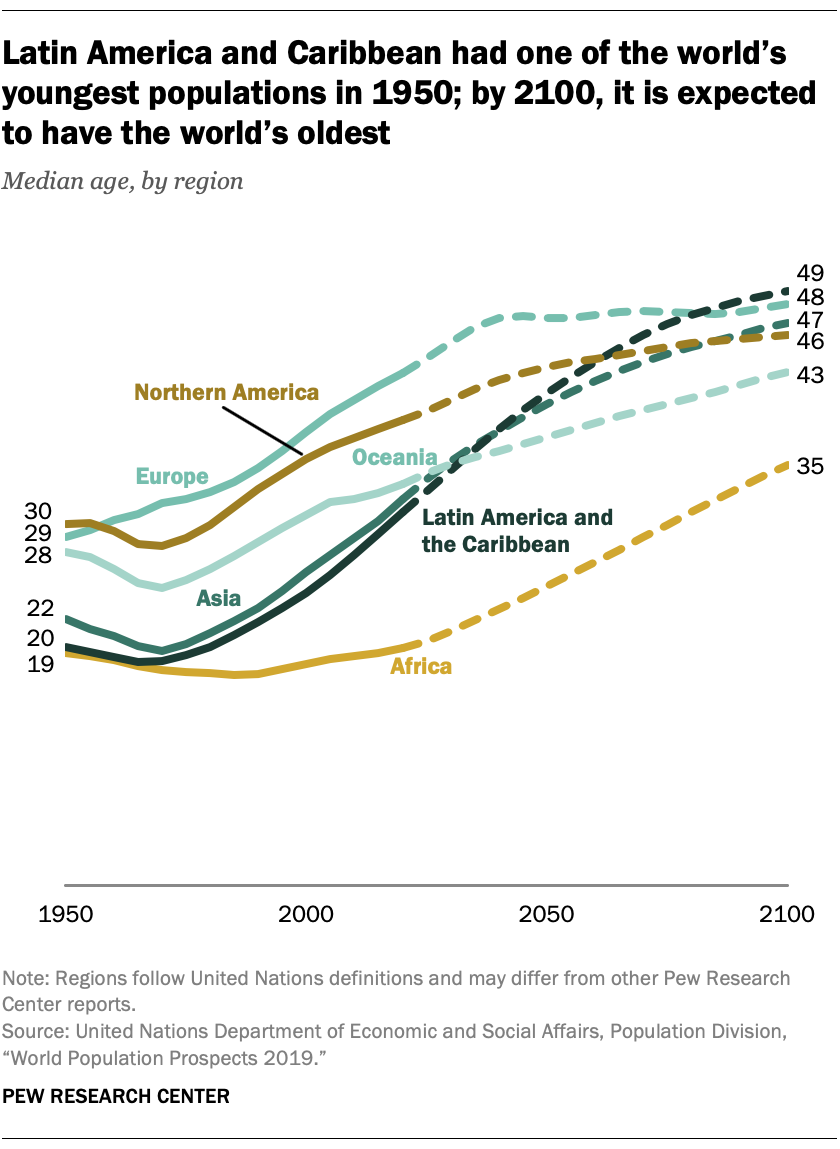 The Latin America and Caribbean region is expected to have the oldest population of any world region by 2100, a reversal from the 20th century. In 1950, the region’s median age was just 20 years. That figure is projected to more than double to 49 years by 2100.

This pattern is evident when looking at individual countries in the region. For example, in 2020, the median ages of Brazil (33), Argentina (32) and Mexico (29) are all expected to be lower than the median age in the U.S. (38). However, by 2100, all three of these Latin American nations are projected to be older than the U.S. The median age will be 51 in Brazil, 49 in Mexico and 47 in Argentina, compared with a median age of 45 in the U.S. Colombia is expected to undergo a particularly stark transition, with its median age more than tripling between 1965 and 2100 – from 16 to 52.

Correction: This post has been updated to clarify that India is expected to become the world’s most populous country by 2027. By 2059, its population is projected to peak at 1.7 billion.

Note: The UN projections for the future population are based on assumptions about likely future changes in key demographic indicators, including fertility, life expectancy and migration. There is uncertainty regarding specific estimates. This analysis uses the medium variant for future dates, which takes the midpoint of likely outcomes. For more information, see the full UN report, data tables and methodology.

Scientists more worried than public about world’s growing population
G7 nations stand out for their low birth rates, aging populations
Why Muslims are the world's fastest-growing religious group
7 key changes in the global religious landscape
Why people with no religion are projected to decline as a share of the world’s population
So far, Trump has granted clemency less frequently than any president in modern history
Biden Begins Presidency With Positive Ratings; Trump Departs With Lowest-Ever Job Mark
Almost all U.S. presidents, including Trump, have been Christians
How we know the drop in Trump’s approval rating in January reflected a real shift in public opinion
What Biden and Trump voters say they want the other candidate’s supporters to know about them