Southern Baptists are the largest evangelical Protestant group in the United States. Descended from Baptists who settled in the American colonies in the 17th century, Southern Baptists formed their own denomination in 1845, following a rift with their northern counterparts over slavery.

The Southern Baptist Convention, as the denomination is formally known, has been in the news recently amid questions over its pro-slavery past and allegations of sex abuse. Last year, one of the denomination’s key seminaries fired its president over an alleged cover-up of rape.

Ahead of the convention’s annual meeting, this year set for June 11 and 12 in Birmingham, Alabama, here are seven facts about Southern Baptists:

1The Southern Baptist Convention is the biggest Protestant denomination in the United States, accounting for 5.3% of the U.S. adult population, according to Pew Research Center’s 2014 Religious Landscape Study. America’s second-largest Protestant group, the mainline United Methodist Church, accounts for 3.6% of U.S. adults. Southern Baptists make up about a fifth of all U.S. evangelical Protestants (21%). 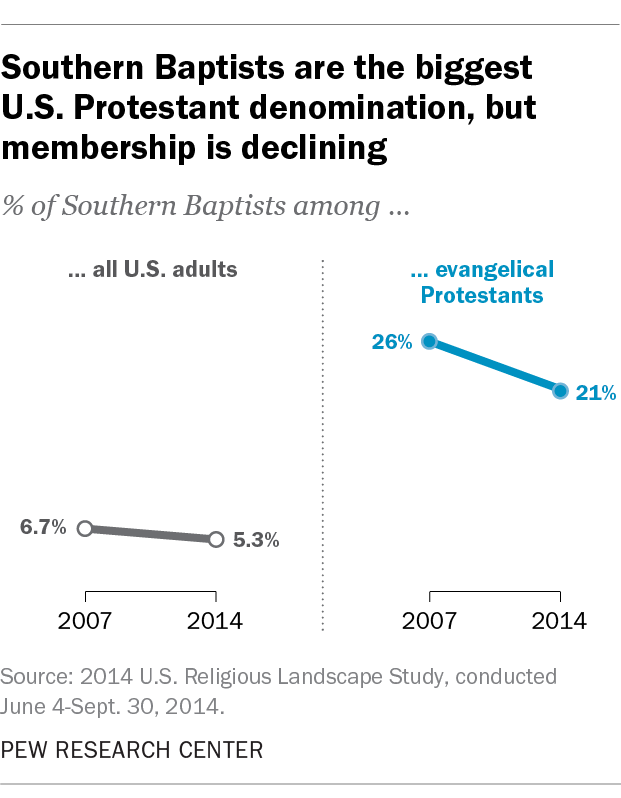 The total number of Southern Baptists in the U.S. – and their share of the population – is falling. When the first Religious Landscape Study was conducted in 2007, Southern Baptists accounted for 6.7% of the U.S. adult population (compared with 5.3% in 2014). And according to the SBC’s official membership tally, there were 14.8 million members of all ages in 2018, down about 1% from a year ago – part of a longer pattern of decline.

3The Southern Baptist Convention is not a centralized church like the Roman Catholic Church, but a fellowship of congregations. Together, these congregations teach that the Bible contains no errors and that personal acceptance of Jesus Christ is the only way to salvation. Southern Baptists also practice baptism by immersion in water. As of 2018, there were 47,456 Southern Baptist churches spread across 41 state conventions, according to the denomination. But Southern Baptists remain heavily concentrated in the South: SBC figures show that 81% of its members live in the region, including about 2.7 million in Texas and more than a million each in Georgia and North Carolina.

4The vast majority of Southern Baptists are white (85%), with few black members (6%) and even fewer Latinos (3%), according to the 2014 Religious Landscape Study. Although the denomination is more racially and ethnically diverse than the largest mainline Methodist or Lutheran churches (both are more than 90% white), it is less diverse than the rest of the evangelical Protestant tradition (73% white, 6% black, 13% Latino) and U.S. Protestants overall (69% white, 18% black, 8% Latino).

5Southern Baptists tend to express higher levels of religious commitment than Americans overall, though they’re generally in line with other evangelicals. Eight-in-ten Southern Baptists say religion is “very important” in their lives and that they pray at least daily (81% for both), compared with smaller majorities of Americans overall who say this (53% and 55%, respectively). The share of Southern Baptists who say the Bible is the literal word of God (61%) exceeds the share who hold this belief among all U.S. adults (31%) and among other evangelical Protestants (53%). 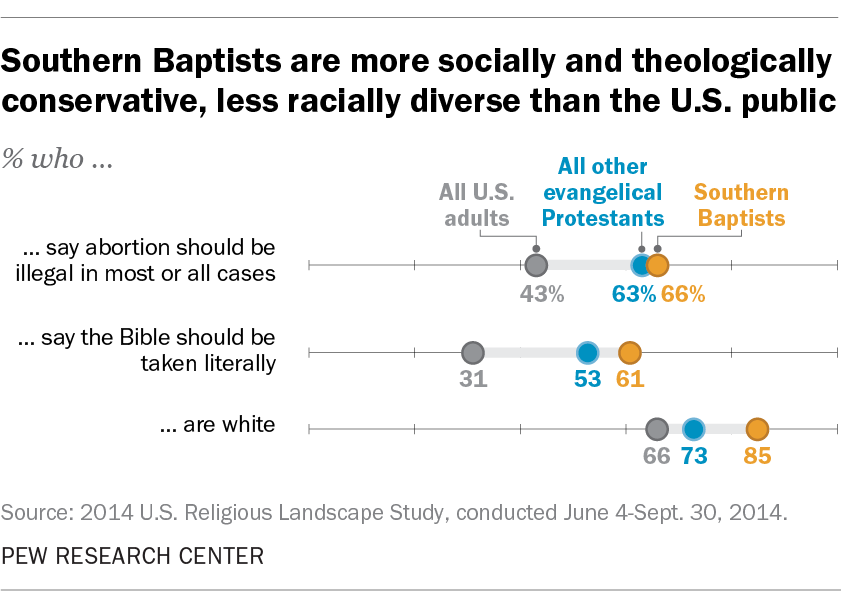 Southern Baptists are more conservative than the general U.S. public on some social issues, and sometimes even more so than other evangelicals. Clear majorities of Southern Baptists say abortion should be illegal in all or most cases (66%) and that homosexuality should be discouraged by society (63%), according to the 2014 Religious Landscape Study. Smaller majorities of other evangelicals take these positions (63% and 53%, respectively), compared with minorities in the general population (43% and 31%, respectively). Like the U.S. public more broadly, Southern Baptists’ views on homosexuality have moved in a more liberal direction. In 2014, 63% said that homosexuality should be discouraged by society, down from 68% in 2007.

7Southern Baptists tend to favor the Republican Party. In 2014, roughly two-thirds of Southern Baptists identified as Republican or Republican-leaning independents (64%), a higher share than among other evangelicals (54%). These figures predate the candidacy and election of President Donald Trump. Vice President Mike Pence gave the keynote speech at last year’s Southern Baptist Convention annual meeting, drawing cheers as well as criticism.