About three-in-ten U.S. adults (29%) have a child younger than 18 at home, and 12% of these parents provide unpaid care for an adult as well. All told, these multigenerational caregivers provide more than two and a half hours of unpaid care a day, on average, according to a new Pew Research Center analysis of Bureau of Labor Statistics data. 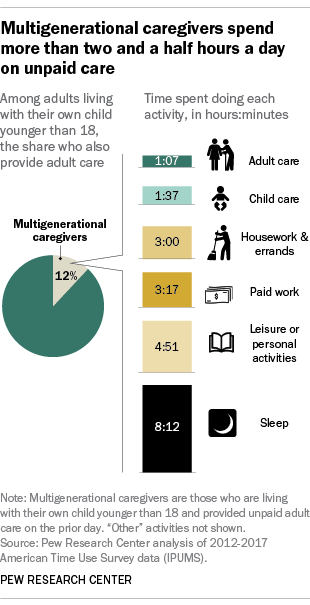 The amount of time parents spend on child care has been on the rise for decades in the United States. Mothers now spend 40% more time with their kids than they did in the mid-1960s, and the amount of time spent by fathers has tripled during that span. All told, parents – both those who are multigenerational caregivers and those who are not – now spend just over an hour and a half a day on child care. Parents who are multigenerational caregivers, meanwhile, spend just over an hour a day performing adult care in addition to the time spent caring for their children.

In this analysis, a multigenerational caregiver is any parent who is age 18 or older, lives with their own child younger than 18 and provided unpaid adult care on the prior day, according to the BLS American Time Use Survey data. Caregiving can include an array of activities: Adult care may include tasks such as providing hands-on assistance with dressing, eating or medical care; providing transportation to appointments; or helping to maintain the homes or finances of those who receive care. Child care may also include hands-on assistance, as well as reading or playing, attending children’s events or helping with homework. A multigenerational caregiver may be providing care to anyone who needs it, be it a relative, friend or neighbor. (See additional tables for a detailed list of caregiving activities included in this analysis.)

This analysis is based primarily on time diary data from the American Time Use Survey (ATUS), which has been sponsored by the Bureau of Labor Statistics and annually conducted by the U.S. Census Bureau since 2003. The ATUS produces a nationally representative sample of respondents, drawn from the Current Population Survey. The Pew Research Center analyses are based on respondents in the 2012-2017 ATUS samples. Multiple years of data were combined in order to produce large enough sample sizes to allow for subgroup analysis. All data were accessed via the ATUS-X website made available through IPUMS.

The diaries record each respondents’ primary daily activities (meaning, the main thing they were doing) sequentially for the prior day, including the start and end times for each activity. In some cases, secondary activities are collected in time diary data as well. For example, if a respondent was keeping an eye on their kids while their main activity was making dinner, child care could be considered their secondary activity.

In this analysis, multigenerational caregivers are people ages 18 or older who are living with their children younger than 18 and who also report providing unpaid adult care. Any respondent who reported any adult care as a primary activity on the prior day is counted as an adult caregiver; in addition, any respondent who reported that they provided any elder care on the prior day (which may have been as a primary activity, or a secondary activity) is also counted as an adult caregiver.

For the analyses of daily time use, only those parents who engaged in adult care as a primary activity on the prior day are counted as caregivers.

On top of the time they spend caring for adults and children, multigenerational caregivers spend an average of 3 hours and 17 minutes a day on paid work. (Nearly three-quarters of these caregivers, or 72%, are employed.) That’s 86 minutes per day fewer than parents who are not also providing adult care. (Among these parents, 78% are employed.)

Multigenerational caregivers spend 21 fewer minutes per day sleeping than parents who are not also caring for an adult. But they spend 16 minutes more a day engaged in leisure and personal activities and 14 minutes more a day doing housework and errands. 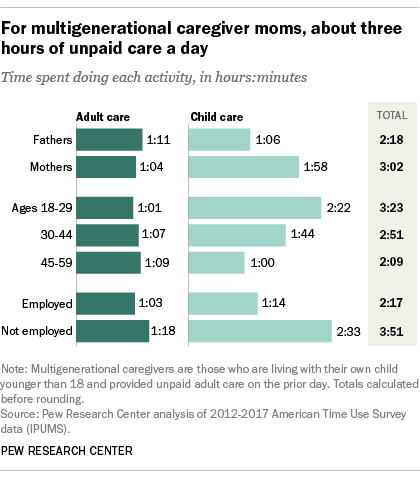 Moms who are multigenerational caregivers spend 45 more minutes a day providing adult or child care than comparable dads. This difference is driven entirely by the fact that moms – whether caring for an adult or not – spend more time on child care daily than dads. There is no significant gender difference in the amount of time moms and dads who are multigenerational caregivers engage in adult care.

Multigenerational caregivers younger than age 30 spend more than three hours a day engaged in this kind of work, compared with just over two hours a day among those ages 45 to 59. As with gender, the age differences in caregiving are driven by differences in time spent caring for children. The youngest parents – who are more likely to have younger children requiring more hands-on care – spend more than two hours a day on child care, compared with an hour among those ages 45 to 59. Younger and older parents who provide multigenerational care spend about the same amount of time providing adult care (about an hour a day each).

Multigenerational caregivers who are stay-at-home parents – the majority of whom are moms – spend about an hour and a half more a day providing unpaid care than their employed counterparts. While much of this difference is driven by the fact that the non-employed spend far more time on child care, they also spend slightly more time on adult care than the employed. It’s worth noting, though, that employed multigenerational caregivers still spend more than two hours a day on unpaid care, in addition to their paid work.

See also: Adult caregiving often seen as very meaningful by those who do it