Most American adults self-identify as Christians. But many Christians also hold what are sometimes characterized as “New Age” beliefs – including belief in reincarnation, astrology, psychics and the presence of spiritual energy in physical objects like mountains or trees. Many Americans who are religiously unaffiliated also have these beliefs.

Overall, roughly six-in-ten American adults accept at least one of these New Age beliefs. Specifically, four-in-ten believe in psychics and that spiritual energy can be found in physical objects, while somewhat smaller shares express belief in reincarnation (33%) and astrology (29%). 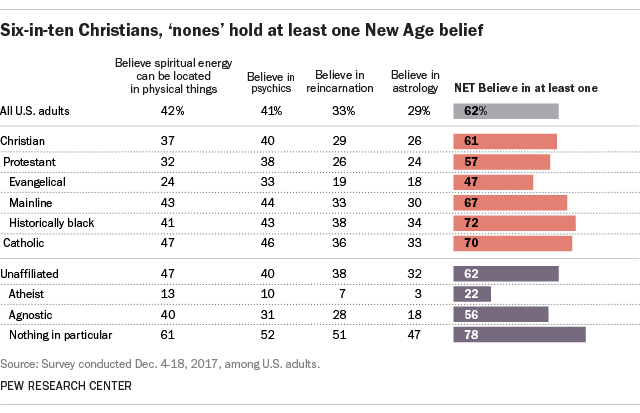 But New Age beliefs are not necessarily replacing belief in traditional forms of religious beliefs or practices. While eight-in-ten Christians say they believe in God as described in the Bible, six-in-ten believe in one or more of the four New Age beliefs analyzed here, ranging from 47% of evangelical Protestants to roughly seven-in-ten Catholics and Protestants in the historically black tradition.

Americans who reject both the religious and spiritual labels also are more likely to reject New Age beliefs. Roughly three-in-ten or fewer in this group believe in psychics, reincarnation, astrology or that spiritual energy can be found in objects. And fewer than half (45%) affirm one or more of these beliefs. 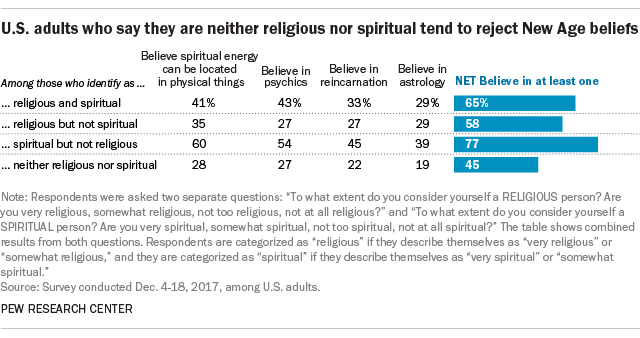 There also are gender, age and other demographic differences associated with New Age beliefs. For instance, just as women are more likely than men to identify with a religion and to engage in a number of religious practices, women also are more likely to hold New Age beliefs. Across all four measures – belief in psychics, reincarnation, astrology and that spiritual energy can be found in objects – larger shares of women than men subscribe to these beliefs. And overall, seven-in-ten women hold at least one New Age belief, compared to 55% of men. 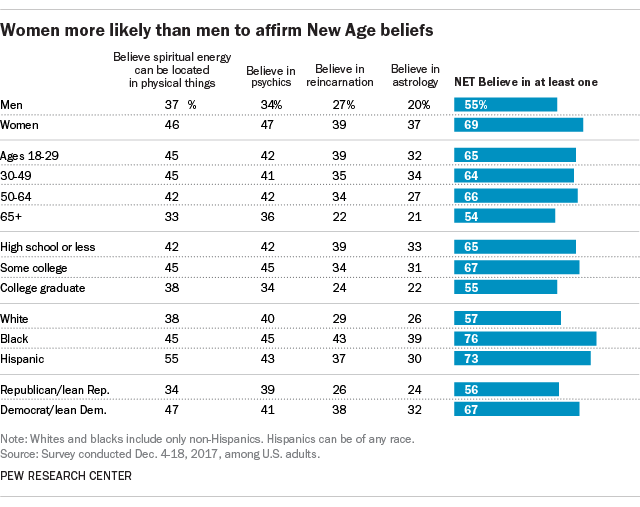 Also, adults under age 65, those who have not graduated from college, racial and ethnic minorities, and Democrats and those who lean toward the Democratic Party are more likely than others to hold to at least one New Age belief.