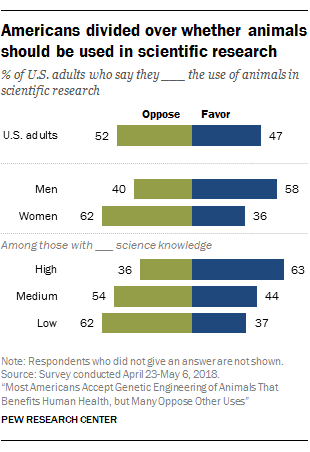 The U.S. public is closely divided when it comes to the use of animals in scientific research. Some 47% favor the practice, while 52% oppose it, according to a new Pew Research Center survey.

These findings are in keeping with a 2014 survey by the Center, which found similar results: 47% of Americans were in favor of using animals in scientific research, and 50% opposed it. The 2014 survey used somewhat different question wording and polling methods.

The latest survey results come at a time when the use of animals in scientific research continues to be a contentious issue that pits members of the scientific community against activists, and sometimes politicians, who say the practice is inhumane and unnecessary. Researchers, however, say the practice remains essential for developing treatments for diseases and conditions that include cancer, arthritis and HIV, and that they’re adhering to ethical guidelines.

As with the 2014 survey, there is a wide gender gap on this issue. A majority of men (58%) favor the use of animals in scientific research while just 36% of women say the same.

In March, President Donald Trump signed bipartisan legislation that limits the use of dogs in scientific research conducted by the U.S. Department of Veterans Affairs. The legislation was opposed by 40 scientific and medical groups, who argued that the research was helpful in developing human therapies.