A majority of Americans continue to say the United States is a better place to live as a result of its growing racial and ethnic diversity.

About six-in-ten U.S. adults (58%) say that having an increasing number of people of different races, ethnic groups and nationalities in the U.S. makes the country a better place to live; just 9% say it makes the country a worse place to live, while about three-in-ten (31%) say it doesn’t make much difference either way, according to a Pew Research Center survey conducted in April and May. These attitudes are only modestly changed from last year. 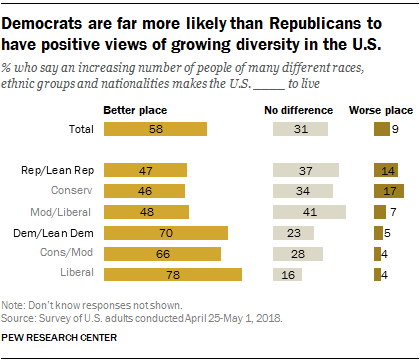 There remain wide differences in these views by party and ideology. Seven-in-ten Democrats and Democratic-leaning independents say growing diversity in the U.S. makes it a better place to live, including 78% of Democrats who describe themselves as liberal. A smaller majority of conservative and moderate Democrats (66%) say the same.

Partisans also differ in the importance they give to living in a racially and ethnically diverse community: Democrats are about twice as likely as Republicans (75% to 38%) to say this is very or somewhat important to them, according to a Pew Research Center survey conducted earlier this year. 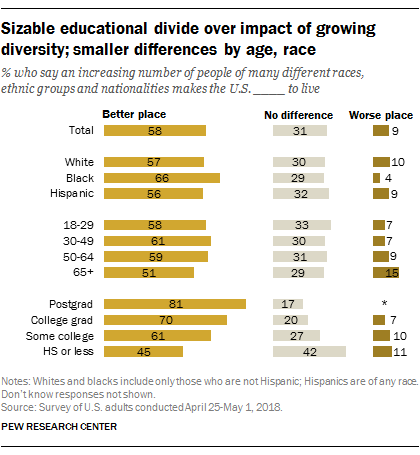