The rise in U.S. children living with either cohabiting or solo parents is due in part to long-term declines in marriage, as well as increases in births outside of marriage. But the likelihood of a child – even one born to two married parents – spending part of their childhood in an unmarried parent household is on the rise. Increases in divorce mean that more than one-in-five children born within a marriage will experience a parental breakup by age 9, as will more than half of children born within a cohabiting union. 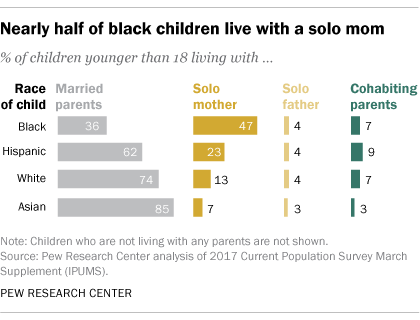 The type of family arrangement a child lives in is associated with a household’s economic situation. A recent Pew Research Center analysis found that 30% of solo mothers and their families are living in poverty compared with 17% of solo father families and 16% of families headed by a cohabiting couple. In comparison, 8% of married couple families are living below the poverty line.