A new question about citizenship on the 2020 census form is in the headlines these days, but the U.S. Census Bureau also plans other changes for the next national count. Among them: For the first time, the agency will add specific check boxes for same-sex couples to identify themselves, and it will ask people who check the white or black race boxes to say more about their national origins.

The bureau’s list of 2020 questions, sent to Congress for review late last month, also was notable for what it did not include. Despite years of research into possible benefits of combining the race and Hispanic questions on the form, the bureau will continue to ask them separately. Bureau researchers had said the combined question produced more complete and accurate data, especially about Hispanics. The census form also will not include a much-researched check box for people of Middle Eastern or North African origins.

The 2020 census is to ask seven data questions: age, sex, Hispanic origin, race, relationship status, homeownership status (own or rent) and citizenship. The bureau also listed several follow-up questions it will ask to make sure that everyone who usually lives in the household being surveyed is included.

The citizenship question, which has been challenged in court, will be asked last to “minimize any impact on decennial census response rates,” according to a memo from Commerce Secretary Wilbur Ross, whose department oversees the Census Bureau.

The new check boxes for same-sex couples are an attempt to fix a long-standing problem of Census Bureau overcounts of these couples.

Currently, the bureau produces a count of same-sex couples by using people’s answers to two questions – one about respondents’ sex and another about how each person in the household is related to the person who filled out the questionnaire. To date, the options for answering the relationship question have included “husband or wife,” “unmarried partner” (this “unmarried partner” category was added to the census in 1990) and more than a dozen other categories. If, for example, the person who filled out the census form was male, and another man in the same household said he was that person’s “husband or wife,” they were counted as a same-sex married couple. But Census Bureau research found that the majority of same-sex married couples counted in the 2010 census and the 2010 American Community Survey were recorded as opposite-sex couples in Social Security files.

For 2020, the census form will include separate categories for “opposite-sex” and “same-sex” spouses and unmarried partners. The new wording is meant to be an additional backstop against misreporting. If people give inconsistent answers to the relationship and gender questions when responding online, a question will pop up alerting the respondent of the discrepancy. If there is an inconsistency on a written questionnaire, the bureau will have the option to change an answer. 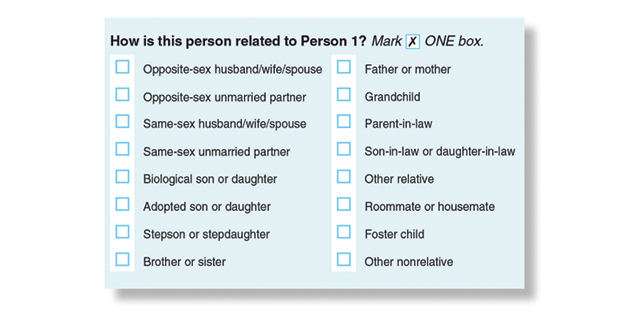 There is growing demand for good data about same-sex couples. Same-sex marriage is not tracked consistently by all states, and some couples marry abroad. More broadly, the rise in same-sex partnerships has fueled demand for more data on these couples. Among the uses for the data are to study the well-being of children in different types of living arrangements and to forecast demand for benefits based on marital status.

The four categories for opposite- and same-sex spouses and opposite- and same-sex unmarried partners are among 16 categories to be offered as answers to the relationship question, two more than in the 2010 census. The form also will bring back the “foster child” category that was dropped for reasons of space in 2010. The 2020 form is to drop the “roomer or boarder” category that has been on the census form for more than a century but is a far less common arrangement than it used to be.

Questionnaire will ask for details on racial ancestry 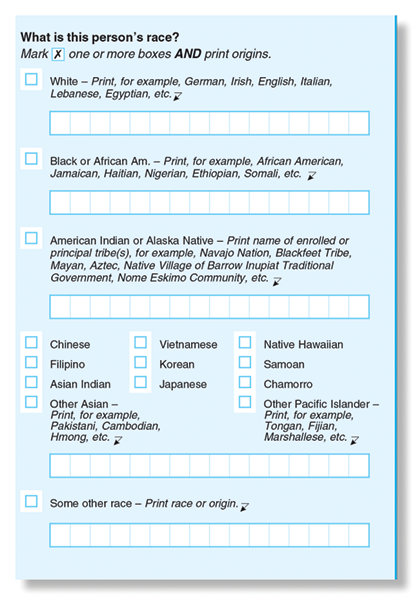 The 2020 census form will use similar questions on race and ethnicity as in 2010, first asking whether someone is Hispanic or not, then asking that person’s racial category. The bureau studied combining the two questions, and researchers said that it produced generally better data for Hispanics, many of whom have avoided answering the race question in the past.

But the U.S. Office of Management and Budget, which oversees how data about race and ethnicity are collected on federal forms, did not act on the Census Bureau’s suggested changes in question categories, so the agency will stick with the two-question format.

Bureau researchers had also recommended adding a new racial or ethnic category for people of Middle Eastern or North African descent, who now generally are counted as white. But the head of the bureau’s population division, Karen Battle, said the bureau needs to do more research on the option, because there is debate as to whether the category would be counted as a race or an ethnicity.

The 2020 census questionnaire will ask white and black respondents for the first time to write in detail about their national origins. The question will supply examples of the most commonly used answers, such as “German” and “Lebanese” under “white” and “Jamaican” or “Somali” under black.” (About half of white and black respondents have supplied additional detail in tests of this option, according to census officials.)

Another change from past censuses is that the question about race also will drop the word “Negro,” so the category will be “Black or African Am.” Census Bureau research found that many people found it offensive. The word “Negro” was added in 1900 on census forms to replace “colored,” one of many changes in racial terminology since the first census in 1790.