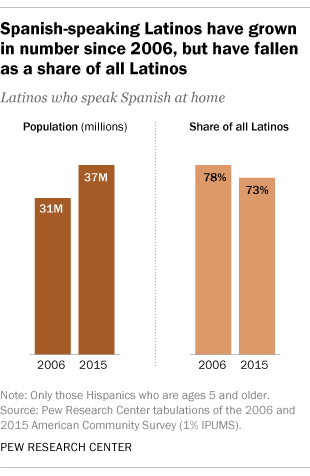 The national decline in Spanish use among Latinos extended to all of the top 25 U.S. metro areas with the largest population of Latinos ages 5 and older. The San Antonio-New Braunfels and Phoenix-Mesa-Scottsdale metro areas had some of the largest declines, with the shares who spoke Spanish in each declining by 9 percentage points. Some of the smallest declines came in the Washington-Arlington-Alexandria, McAllen-Edinburg-Mission, Sacramento-Roseville-Arden-Arcade and Miami-Fort Lauderdale-West Palm Beach metro areas, where the share who spoke Spanish at home declined by about 2 percentage points each from 2006 to 2015. (Click here for a sortable table of Spanish use by metro area.)

Despite this drop-off in use, most Latinos agree that speaking Spanish is a vital skill. In a 2011 Pew Research Center survey, nearly all Latinos said it was important that the next generation of Latinos in the U.S. speak Spanish. Yet many Latinos (71%) say it’s not necessary to speak Spanish to be considered Latino, a 2015 survey found.

About nine-in-ten Hispanics spoke Spanish at home in Miami (90%) and McAllen (90%), the highest rates in the nation among the top 25 Latino metro areas. The Latino population in Miami had the highest share of immigrants (64%) among the nation’s largest metro areas. In McAllen, immigrants made up only 32% of Latinos, though the metro area’s shared border with Mexico helps explain the widespread use of Spanish there.

By contrast, in the Denver metro area, 57% of Latinos spoke Spanish, the lowest share among the metro areas analyzed. Sacramento and San Antonio also had low shares, with about 60% of Latinos speaking Spanish at home in each metro area. These areas had some of the lowest immigrant shares among their Latino populations – 29% in Denver, 30% for Sacramento and 16% in San Antonio – which helps account for their low Spanish-speaking shares.

Spanish use has also become less widespread among Latinos in the nation’s two largest metro areas by Latino population. In Los Angeles-Long Beach-Anaheim, home to more than 5.5 million Latinos ages 5 and older, 80% spoke Spanish at home in 2015, a decline of 3 percentage points from 2006. New York-Newark-Jersey City (3.6 million Latinos ages 5 and older) saw an even larger decline, with the share who spoke Spanish dropping from 85% in 2006 to 80% in 2015.