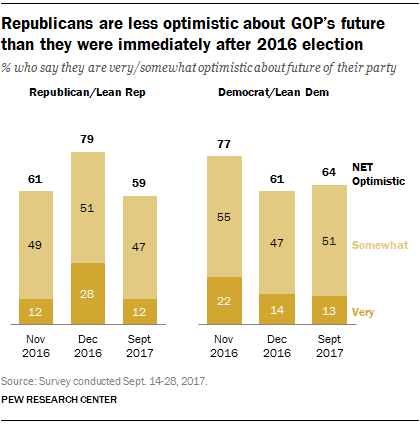 Republicans and Republican-leaning independents are less confident about what lies ahead for their party than they were immediately following the election of Donald Trump last year.

Pessimism about the GOP’s future remains a minority viewpoint among Republicans and Republican leaners. However, a Pew Research Center survey of 4,867 adults conducted Sept. 14-28 finds that the share of Republicans who are very or somewhat pessimistic about the future of their party has nearly doubled, from 20% in December to 39% in the current survey.

About six-in-ten Republicans (59%) say they are very (12%) or somewhat (47%) optimistic about the future of the Republican Party. In December 2016, nearly eight-in-ten (79%) said they were very (28%) or somewhat (51%) optimistic. Republican views are now comparable to what they were on the eve of the 2016 election: Last November, 61% expressed optimism about their party’s future.

The decline in optimism about the GOP’s future has occurred across most Republican subgroups.

Democratic views have shown little change since December and there are only modest differences in current attitudes across demographic groups.