North Korea’s successful test of an intercontinental ballistic missile has prompted strong criticism from the United States and from governments across the Asia-Pacific region. But even before the test – which Washington and Seoul labeled “destabilizing and unlawful” – Americans and many people in the Asia-Pacific region held negative views of North Korea and its nuclear weapons program.

Here are four new key findings from Pew Research Center about views of North Korea and its nuclear program, based on a survey conducted in the U.S. and six Asia-Pacific countries between February and May. 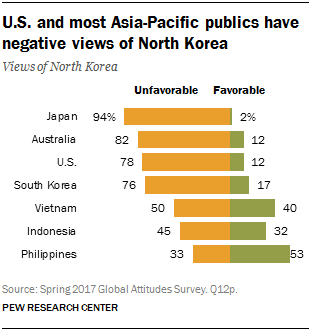 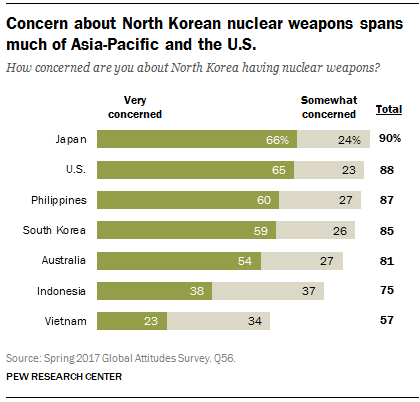 Americans and most people in the Asia-Pacific countries surveyed are concerned about North Korea’s nuclear program. Half or more in each country say they are somewhat or very concerned about the nuclear program. In the Asia-Pacific region, anxiety is highest among Pyongyang’s closest neighbors – Japan, the Philippines and South Korea, where around 60% or more say they are very concerned. 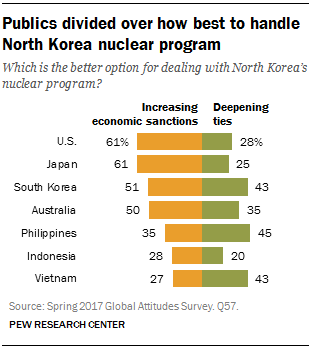 People in the region are divided about whether increasing economic sanctions or deepening ties is the better response to North Korea’s nuclear program. Although people in the Asia-Pacific countries surveyed are largely united in their concerns about the nuclear program, there is no clear consensus about how best to deal with the issue. Among the more economically developed countries, the preference is for increasing economic sanctions. Half or more Americans, Japanese, South Koreans and Australians believe increasing sanctions will be more effective than deepening ties. But opinion is more divided in the developing countries in the region. A plurality of Vietnamese and Filipinos say the nuclear problem should be handled by deepening ties with North Korea, and in Indonesia, large shares volunteered that neither was a good strategy (18%) or said they did not know (23%). 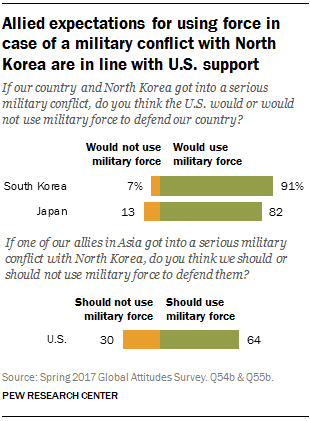