Global views of the U.S. and its president have shifted dramatically downward since the end of Barack Obama’s presidency and the start of Donald Trump’s, and they are now at similar levels to ratings from the George W. Bush era, according to a new Pew Research Center report that examines attitudes in 37 countries. 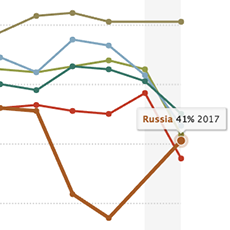 Build your own charts to see U.S. favorability and confidence in the U.S. president from 2002 to 2017.

Since the Center started tracking global opinions of the U.S. and its president in 2002, these views have risen and fallen dramatically. You can explore the arcs of U.S. favorability ratings in countries around the world by using this interactive chart builder. (Although the Center doesn’t conduct surveys in every country every year, patterns over time should be clear.)

Here’s a quick global tour highlighting trends in U.S. favorability and confidence in the U.S. president: 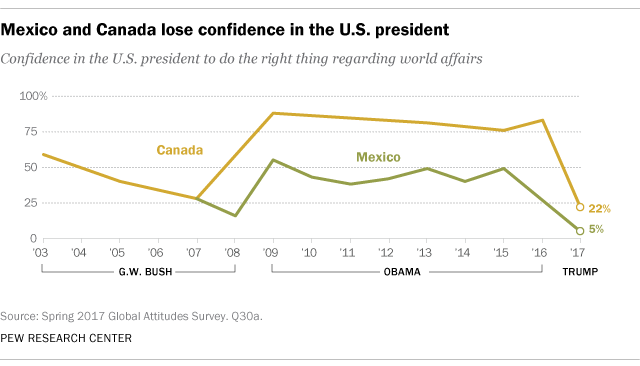 These countries have generally maintained fairly steady levels of U.S. favorability over the past 15 years, yet they both show a sharp drop in U.S. favorability since Trump took office. Three-in-ten Mexicans have a very or somewhat favorable view of the U.S., down from two-thirds (66%) in 2015. About four-in-ten Canadians have favorable views of the U.S. (43%), down from 68% in 2015.

2In Western European countries, confidence in the U.S. president has declined sharply. Clear majorities in the United Kingdom, France and Germany had at least some confidence in Obama, with shares reaching 93% in Germany at the start of his presidency. (German confidence declined somewhat in 2014 after allegations the U.S. National Security Agency eavesdropped on Chancellor Angela Merkel, though it rebounded when the German investigation was later dropped.) 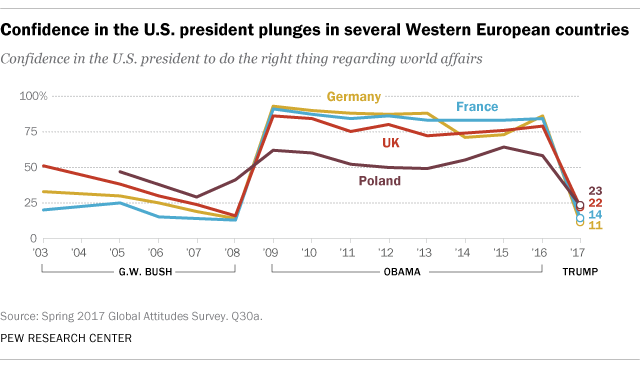 In Europe, Poland is a bit of an outlier, since its confidence in the U.S. president changed less dramatically across the three administrations. Polish respondents had a Bush-era high of 47% confidence and an Obama-era high of 64%, yet just 23% of Poles have confidence in Trump in 2017.

When it comes to U.S. favorability, Poland has remained relatively positive and stable since 2002. France and Germany, on the other hand, show greater fluctuation across administrations, with higher overall U.S. favorability during Obama’s presidency. 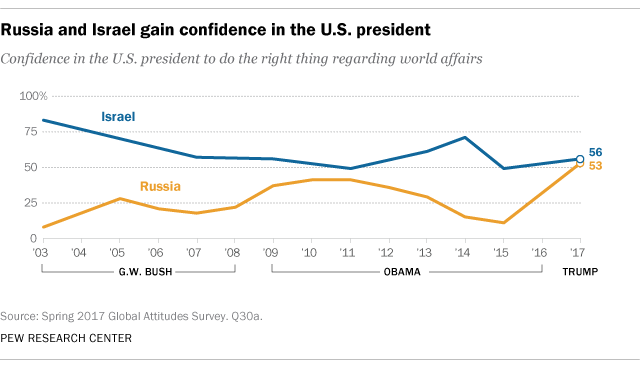 In Israel, 56% are confident in President Trump, up from 49% confidence for Obama in 2015. Over the past 15 years, Israeli confidence in the U.S. president was highest in 2003, when 83% said they had at least some confidence in George W. Bush.

While more than half from both countries have confidence in Trump, Russia and Israel differ in overall U.S. favorability. Israel has shown consistently favorable views of the U.S. over the past 15 years (81% in 2017). Russia’s favorability of the U.S. has fluctuated more, but is up to 41% with Trump in office after hitting a low of 15% two years earlier. 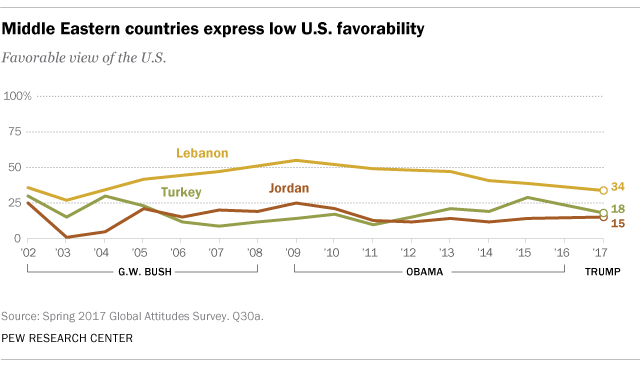 Lebanon, Turkey and Jordan consistently have had low confidence in the U.S. president, regardless of who that was, over the past 15 years. Today, just 15% in Lebanon, 11% in Turkey and 9% in Jordan have confidence in Trump.

5Japan and South Korea have sharply lower confidence in the U.S. president, but majorities remain favorable toward U.S. overall. Only around a quarter of Japanese respondents (24%) and 17% of South Koreans say they are confident in the U.S. president now that Trump is in office. That represents a 71-percentage-point drop in South Korea from 2015. And confidence among Japanese dropped 54 points between 2016 and 2017. 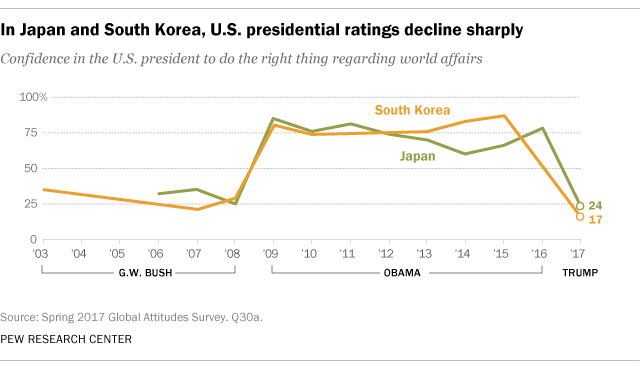 Despite this plunge in attitudes toward the U.S. president, overall U.S. favorability remains high in both countries. Three-quarters of South Koreans have a favorable view of the U.S. while 57% of people in Japan say the same. U.S. favorability gradually climbed among South Koreans since 2002, with a 9-point drop this year compared with 2015. In Japan, on the other hand, favorability declined during the Bush years, peaked in 2011 at 85% and fell to 57% in 2017.

Use this interactive to explore global opinions of the United States and confidence in its president since 2002.

9 charts on how the world sees President Trump
How people around the world see the U.S. and Donald Trump in 10 charts
How the world views the U.S. and its president in 2018 in 9 charts
French Have Much More Confidence in Obama Than They Had in Bush
The Trump era has seen a decline in America’s global reputation