Note: 2018 findings from these questions can be found here.

Beyond partisan differences over economic policies, there are stark divisions on a fundamental question: What makes someone rich or poor? Most Republicans link a person’s financial standing to their own hard work – or the lack of it. Most Democrats say that whether someone is rich or poor is more attributable to circumstances beyond their control.

The public overall is about evenly divided over which has more to do with why a person is rich: 45% say it is because he or she worked harder than most people, while 43% say it is because they had more advantages in life than others, according to a survey conducted April 5-11 among 1,501 U.S. adults. Opinion has shifted modestly on this question: In both 2015 and 2014, more attributed a person’s wealth to greater advantages than to a stronger work ethic.

In assessing why some people are poor, 53% think it is because of circumstances beyond their control, while 34% attribute it to a lack of effort. There has been little change in these opinions in recent years, according to a survey in December. 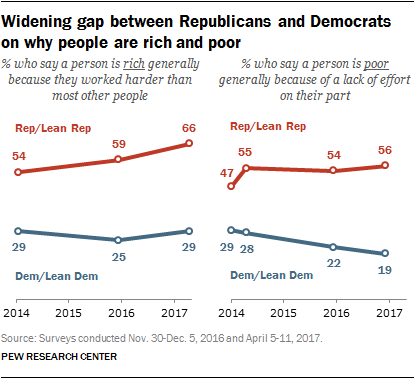 By about three-to-one (66% to 21%), Republicans and Republican-leaning independents say hard work, rather than a person’s advantages, has more to do with why someone is rich. By nearly as wide a margin, Democrats and Democratic leaners say the opposite: 60% say a person is rich because they had more advantages than others, while just 29% say it is because they have worked harder.

As with many other issues, partisan differences in views of why people are rich and poor have increased in recent years. Since 2014, the share of Republicans who say a person is rich more because they have worked harder than others has risen 12 percentage points, from 54% to 66%. Democrats’ views have shown less change.

Republicans are more likely to say the reason someone is poor generally has more to do with of a lack of effort (56%) than circumstances beyond a person’s control (32%). By 71%-19%, more Democrats say that circumstances beyond one’s control are generally more often to blame for why a person is poor. The share of Democrats who link a person being poor to a lack of effort has declined since 2014 (from 29% to 19%). 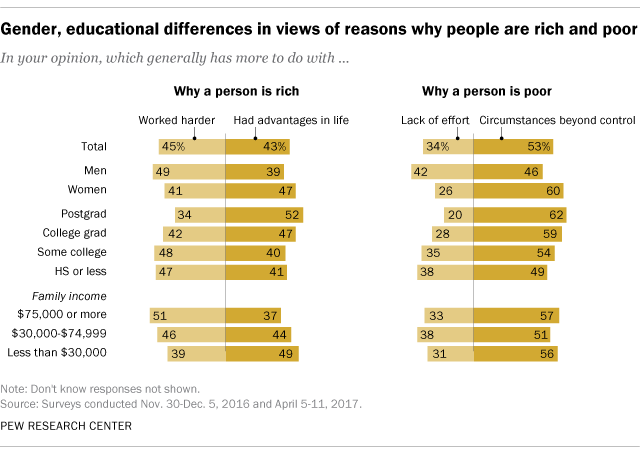 People with higher family incomes are more likely than those with lower incomes to say a person is rich more because they work harder than because they had more advantages. There are only modest differences across income categories in views of why someone is poor.