This year, the Jewish festival of Passover – April 10 to 18 – coincides with the Christian celebration of Easter. And Easter, somewhat unusually, falls on April 16 in both the Orthodox and Western calendars.

Both Passover and Easter are based on biblical accounts. Passover commemorates the Israelites’ Exodus from Egypt, as described in the Hebrew Scriptures. Easter marks the resurrection of Jesus, as described in the Christian Gospels. In this important season for both traditions, here are five key facts about Americans and their holy texts. 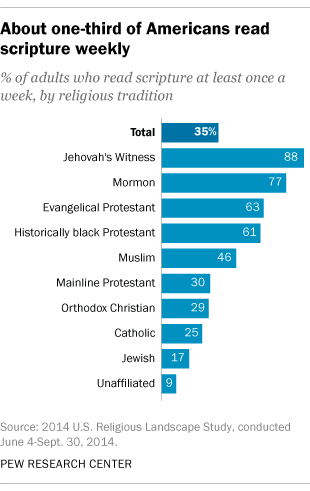 3 Christians, who make up a majority of U.S. adults (71%), are divided over how to interpret the Bible. While about four-in-ten Christians (39%) say the Bible’s text is the word of God and should be taken literally, 36% say it should not be interpreted literally or express another or no opinion. A separate 18% of Christians view the Bible as a book written by men, not God.

5 Seven-in-ten Americans (71%) know the Bible teaches that Jesus was born in Bethlehem. A similar share know that Moses was the biblical figure who led the Exodus from Egypt, and 63% could identify Genesis as the first book of the Bible, according to our 2010 religious knowledge survey. But fewer than half of adults (45%) could name all four Gospels (Matthew, Mark, Luke and John), and only four-in-ten (39%) identified Job as the biblical figure known for remaining obedient to God despite extraordinary suffering.

Regarding other religious texts, four-in-ten Americans knew that Jesus appeared to followers in the Americas according to the Book of Mormon, and 54% correctly name the Quran as the holy book of Islam.