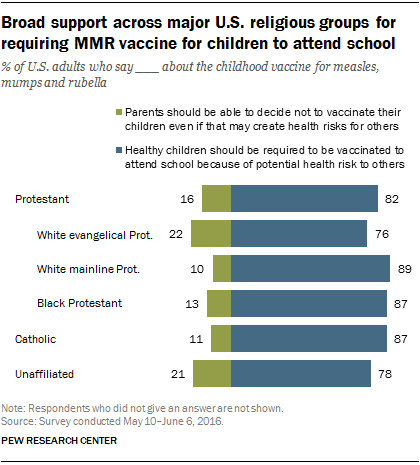 Large majorities of U.S. adults from all major religious groups say healthy children should be required to be vaccinated against measles, mumps and rubella to attend school because of the potential health risk to others when children are not vaccinated. Still, there are some modest differences between religious groups, a new Pew Research Center survey finds.

Most white evangelicals identify as Republican or Republican-leaning, while most of the religiously unaffiliated are Democrats or lean to the Democratic Party. The survey finds Republicans and Democrats (including those who lean to either party) are about equally likely to support a school-based vaccine requirement.

Public schools around the nation require children to have the MMR vaccine in order to attend school. All states allow exceptions for medical reasons, however, and 46 states specifically permit exceptions for religious reasons. No major religious groups are known to advocate against childhood vaccinations on the basis of doctrine. 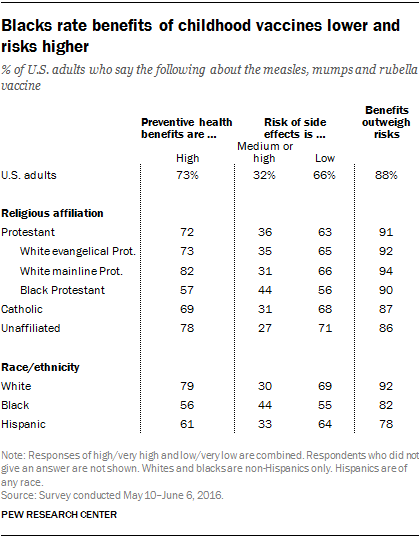 When it comes to the safety of the MMR vaccine, most major religious groups have similar beliefs. For example, 69% of Catholics, 73% of white evangelical Protestants and 82% of white mainline Protestants think the preventive health benefits of the MMR vaccine are high. But a substantially smaller share of black Protestants (57%) say the preventive health benefits of the vaccine are high.