Israel recently vaulted back onto the front pages when the UN Security Council on Dec. 23 voted 14-0 to condemn the continued construction of Israeli settlements in the West Bank. The United States, in a rare show of public displeasure with Israel, abstained from the vote, forgoing the opportunity to veto the resolution. In the days following, the two countries traded criticisms, culminating a week later with U.S. Secretary of State John Kerry saying that settlements pose a “threat” to peace and Israeli Prime Minister Benjamin Netanyahu issuing a critical response.

Some Israeli politicians in the current governing coalition have mentioned security implications as one argument in favor of West Bank settlements, but Pew Research Center polling in late 2014 and early 2015 found that there is no clear consensus among Israeli Jews over whether settlements help or hurt the country’s security.

Among Israeli Jews, opinion about the role of settlements varies greatly depending on a number of factors.

There also are major gaps based on religious identity. Nearly all Israeli Jews identify with one of four categories, ranging from Haredi (“ultra-Orthodox”) to Hiloni (“secular”). Secular Jews are somewhat ambivalent about settlements on occupied territory, with 42% saying they hurt Israel’s security and 31% saying they help. Half of ultra-Orthodox Jews say settlements help Israel’s security; this view may not be more universal because Haredim tend to be more ambivalent about the state of Israel than other Jews in some ways. 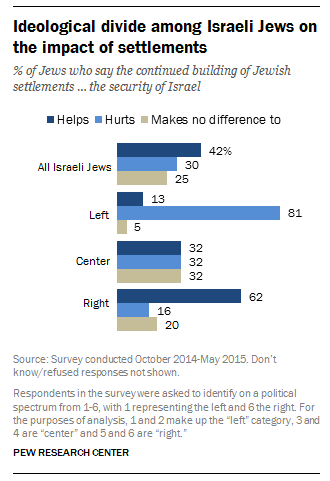 Perhaps not surprisingly, a solid majority of Israeli Jews who currently live in the West Bank say the settlements help Israel’s security (65%). This group is much more likely to identify as Haredi or Dati than the Israeli Jewish population overall, and also more likely to say God gave Israel to the Jewish people.

Kerry’s view on the settlements may be more in line with U.S. Jewish opinion, at least as measured by Pew Research Center’s survey of U.S. Jews. While this 2013 survey was conducted before our Israel poll – and opinions may have shifted since the survey was conducted due to ongoing developments in the region – only 17% of American Jews at the time said that settlements help Israel’s security, compared with 44% who said the settlements make Israel less secure.