The number of physical assaults against Muslims in the United States reached 9/11-era levels last year, according to a Pew Research Center analysis of new hate crimes statistics from the FBI. There were 91 reported aggravated or simple assaults motivated by anti-Muslim bias in 2015, just two shy of the 93 reported in 2001. 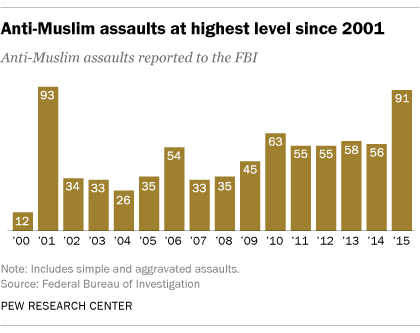 Overall, the FBI reported 257 incidents of anti-Muslim hate crimes in 2015, a 67% increase from the previous year. These incidents included 301 individual crimes, 71% of which were crimes against people, as opposed to property. (Incidents can encompass more than one crime.) By contrast, crimes perpetrated against other religious groups more often involved property offenses, such as vandalism or theft. For example, 64% of anti-Jewish and 51% of anti-Catholic offenses in 2015 involved vandalism, compared with just 23% of anti-Muslim offenses.

The same survey found that almost half of American adults (49%) think at least “some” Muslims in the U.S. are anti-American, including 11% who think “most” or “almost all” are anti-American. Another survey from about the same time (December 2015) found that 46% of Americans thought Islam was more likely than other religions to encourage violence.

FBI data for 2016 will not be released until next year, but there have been anecdotal reports of a continued rise in anti-Muslim hate crimes this year. While not all incidents can be confirmed, the Southern Poverty Law Center, a civil rights advocacy group that tracks hate crimes, reported more than 30 cases of anti-Muslim incidents in the five days following the presidential election alone.

The FBI collects hate crime data from about 15,000 law enforcement agencies that voluntarily participate, which means the annual statistics likely undercount the number of hate crimes in a given year. Still, the report is a useful tool for comparing hate crimes over time and tracking the minimum number of these crimes that occurred in a given year.