Americans are divided in what they consider the most positive and negative attribute of the news media, and much of that divide follows party lines: Conservative Republicans and liberal Democrats stand far apart in their views of what the media do best and worst.

Conservative Republicans, for example, are more likely to say that reporting biased news is the most negative thing the media do, while liberal Democrats single out poor choices in the news they cover or how they cover it, according to a Pew Research Center survey conducted Jan. 12-Feb. 8, 2016, in association with the John S. and James L. Knight foundation.

The survey asked Americans to volunteer what they thought was the single most positive and negative thing the news media do.

As far as the most positive thing the media do, Americans are mostly split between two traits. Three-in-ten describe the media’s most positive attribute as simply doing their job of reporting the news, whether in general or on a specific topic. (Weather and traffic tops the list of subject areas, named by 11% of U.S. adults.)

Nearly as many say the news media provide a service to the public (25%), such as informing people or acting as a watchdog. The other most positive traits mentioned, though by no more than one-in-ten Americans, are the media’s reports on uplifting or positive stories (8%) and their practice of high journalistic standards (6%). Additionally, 8% say the news media do nothing positive.

There is also a lack of consensus over the news media’s most negative trait. About two-in-ten Americans (22%) say the most negative thing the media do is report biased news, while 18% point to a failure to make good choices in what or how to report the news, such as too narrow a scope or reporting on things that aren’t newsworthy. An additional 16% think the worst thing they do is lie, mislead or sensationalize, and 14% highlight too many reports on negative stories, such as guns and crime. 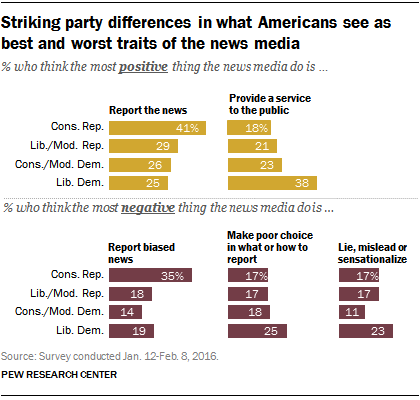 Much of the division in the best and worst attributes of the media lies among partisans on each side of the ideological spectrum.

When it comes to the most negative trait, about a third (35%) of conservative Republicans say the worst thing the news media do is report biased news, nearly double that of any other group. This is consistent with previous research that shows that conservative Republicans, more than any other group, believe that the news media tend to favor one side when they cover political and social issues.