Justin Trudeau, the recently elected (and popular) prime minister of Canada, will hold his first formal meeting with President Barack Obama at the White House on Thursday, an occasion that will also be marked by the first state dinner for a Canadian leader since 1997. High on the agenda will be discussion of a continental strategy on climate change. 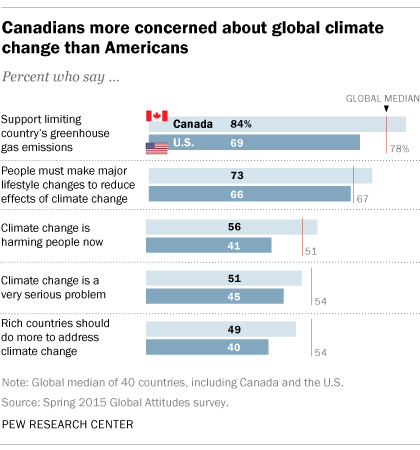 Canadians are more concerned than their American counterparts on a number of key issues related to climate change. For example, in Pew Research Center’s spring 2015 survey of 40 nations, 84% of Canadians supported an international agreement to limit their country’s greenhouse gas emissions, compared with 69% of Americans. This agreement was subsequently adopted at the Paris COP21 conference, but whether the United States will enact such an accord remains in question.

A majority (56%) of Canadians say climate change is harming people now, while only 41% of Americans agree. On most of the questions presented to both Canadians and Americans on climate change, Canadians were more concerned and closer to the global 40-country median than Americans, who were generally less concerned than others around the world. 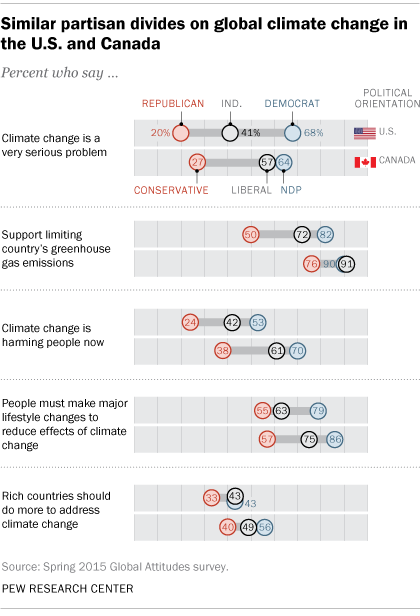 Despite the greater concern shown by Canadians on global warming, partisan divides on the issue follow a similar pattern in both countries. Supporters of the Conservative Party of Canada (CPC), which was headed by former Prime Minister Stephen Harper, are much less worried about the consequences of climate change, as are Republicans in the U.S. Meanwhile, followers of Trudeau’s Liberal Party in Canada and members of the New Democratic Party (a social-democratic party led by Tom Mulcair), are more concerned about climate change, much like political independents and Democrats in the U.S.

Despite the differences on climate change between U.S. and Canadian publics, most Canadians like the U.S. (68% favorable rating as of spring 2015) and want to maintain the status quo of warm relations between the two countries. And the high level of confidence (76%) Canadians have in Obama to handle international affairs further supports this notion.

What the world thinks about climate change in 7 charts