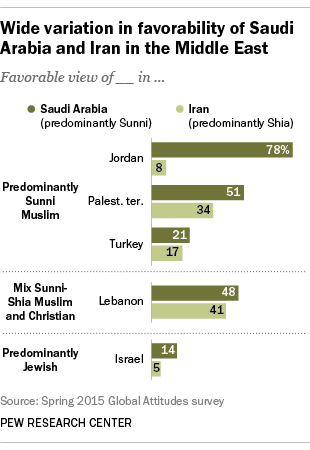 The recent execution of Shia leader Nimr al-Nimr, along with dozens of other prisoners, by the Saudi Arabian government has sparked a furor in the Middle East. The storming of the Saudi Embassy amid protests in Iran, a predominantly Shia Muslim nation with long-standing animosity toward predominantly Sunni Saudi Arabia, has led to the cutting of diplomatic ties between the two powers. Saudi allies in the region, such as Bahrain, have followed suit.

The tensions between Saudi Arabia and Iran are often characterized as sectarian – that is, Iran and its Shia allies versus Saudi Arabia and its Sunni brethren. And this characterization plays out to a large degree in public attitudes toward the two countries in five Middle Eastern nations Pew Research Center surveyed in spring 2015. In Jordan, a predominantly Sunni Muslim nation, 78% of the public have a favorable view of Saudi Arabia, compared with only 8% who have a positive opinion of Iran.

In the Palestinian territories, where again Sunnis predominate, about half (51%) have a favorable view of Saudi Arabia. Here, there is a split by location. Among Palestinians living in the Gaza Strip, 60% have a positive opinion of Saudi Arabia, compared with 46% among West Bank residents. Meanwhile, only 34% in the Palestinian territories express a positive opinion of Iran, with more support coming from the West Bank (40%) than from Gaza (24%). 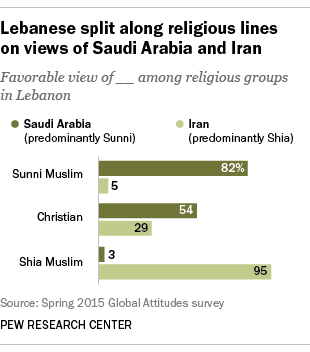 In two other Middle Eastern nations surveyed, there is little support for either Saudi Arabia or Iran. In Turkey, around two-in-ten have favorable views of each power, although it’s worth noting that people in Turkey tend to have low ratings for many nations. And in Israel, even fewer like Riyadh (14%) or Tehran (5%). In Israel, the Arab population is about as positive toward Saudi Arabia (37% favorable) as it is Iran (34%), despite the fact that the Israeli Muslim population is predominantly Sunni. Jews in Israel, however, have little regard for Saudi Arabia (10% favorable) or for Iran – for which there is 0% favorability among Israeli Jews.

Note: See here for topline results on views of Saudi Arabia and methodology.