What are the best skills for kids to have these days?

In today’s technology-driven world, is it best for children to hone their science and math skills to catch up with other countries that outperform the U.S.? Or is it best for them to be more well-rounded, with strong arts and athletic skills as well? Or perhaps parents should instead focus on encouraging less tangible skills in their kids, such as teamwork, logic and basic communication skills.

Pew Research Center recently asked a national sample of adults to select among a list of 10 skills: “Regardless of whether or not you think these skills are good to have, which ones do you think are most important for children to get ahead in the world today?”

The answer was clear. Across the board, more respondents said communication skills were most important, followed by reading, math, teamwork, writing and logic. Science fell somewhere in the middle, with more than half of Americans saying it was important.

Rounding out the bottom were skills more associated with kids’ extracurricular activities: art, music (sorry, right-brained people) and athletics. There was virtually no difference in the responses based on whether the person was a parent of a child aged 18 and younger or not.

But we also found some interesting differences: 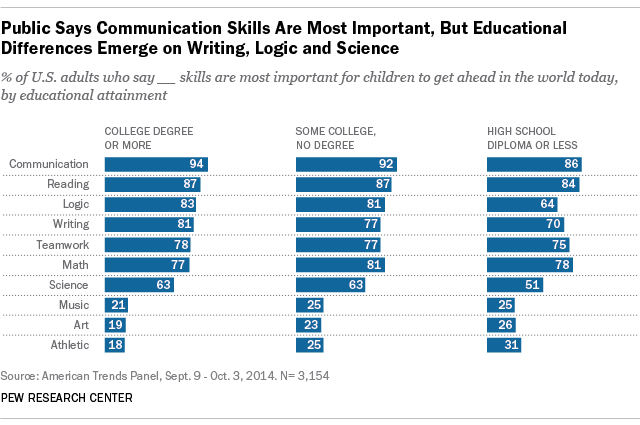 On the flip side, Republicans (78%) and independents (77%) were more supportive of logic skills, compared with 70% among Democrats.

Note: This survey was conducted through Pew Research Center’s American Trends Panel, a nationally representative panel of randomly selected U.S. adults. The survey was conducted Sept. 9-Oct. 3, 2014, among 3,154 respondents and had a margin of error of 2.7 percentage points. Topline results can be found here.