Almost one-in-five members of the House and Senate are a racial or ethnic minority, making the 114th Congress the most diverse in history. However, Congress remains disproportionately white when compared with the U.S. population, which has grown increasingly diverse in recent decades, according to a Pew Research Center analysis. 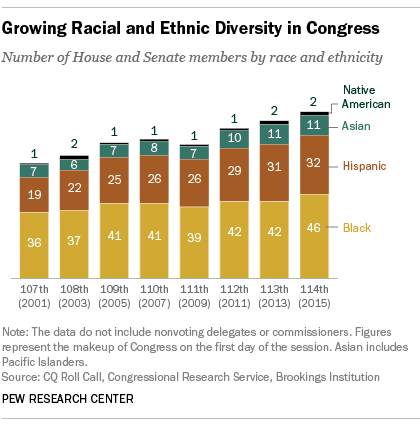 Overall, non-whites (including blacks, Hispanics, Asian/Pacific Islanders and Native Americans) make up 17% of the new Congress, but that is below these groups’ 38% share of the nation’s population. This difference also exists among the newly elected members of Congress, as minorities account for 11 of 71 (15%) new members of the House and Senate. (No new senators are a racial or ethnic minority.) 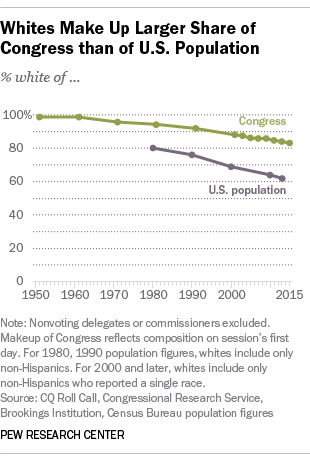 Among minority groups, the biggest growth over this time has been among Hispanics. In 2001, there were 19 Hispanics in Congress, compared with 32 today.

The increasing number of minorities in Congress is due almost entirely to membership changes in the House, where today 85 of 435 (20%) members are non-white, according to CQ Roll Call. In 2001, there were 60 minorities in the House. By comparison, in the Senate, just six of 100 senators now belong to a racial or ethnic minority group, up from three senators in 2001.

The increase in the number of minorities in the House since 2001 has largely come among newly elected Democrats, though Republicans have also made some gains. Since 2001, the number of House Democrats who are minorities increased by 18, from 56 then to 74 now. By comparison, there was an increase of seven representatives among House Republicans over the same period, rising from four then to 11 now.

But despite these non-white gains, whites account for 83% of the new Congress but just 62% of the population. This gap has widened over time. In 1981, 94% of Congress was white compared with about 80% of the U.S. population.