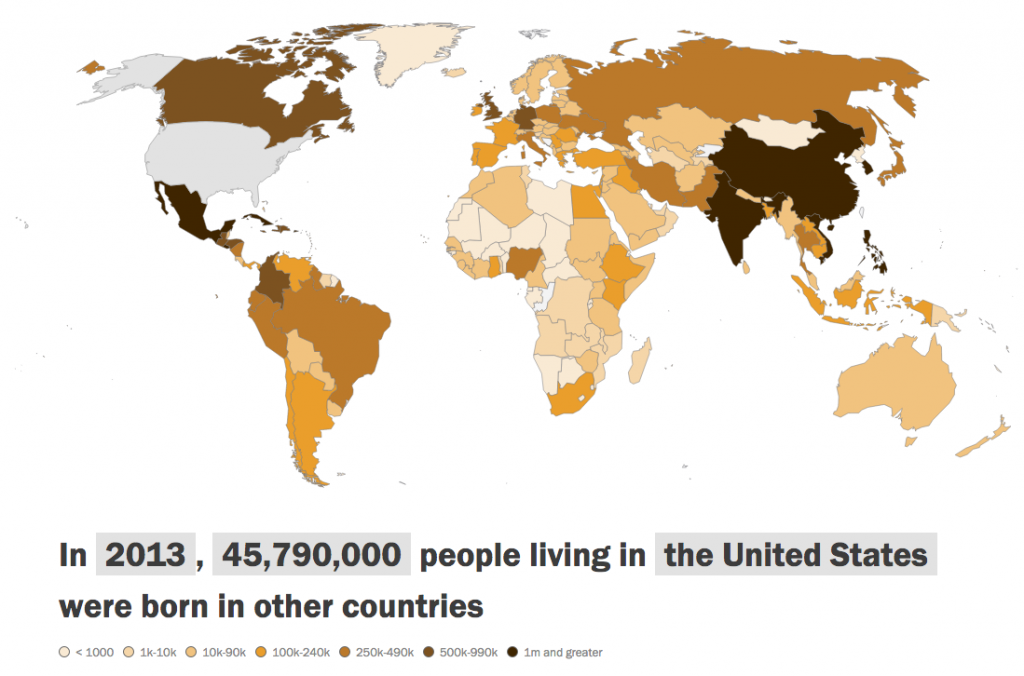 Since humans first left Africa 60,000 years ago, they have been migrating around the planet in great numbers – and the advent of international borders certainly did not stop global migration. Although the percentage of the world’s people living outside of their birth countries has remained steady in recent decades, the world’s increasing population means that the sheer number of international migrants has never been higher.

This interactive map, which uses United Nations Population Division data, lets you view the total number of people living outside their birth countries. It also shows migrants in both directions – as emigrants, who have left their origin country, or as immigrants, who have entered a destination country. The U.N. defines an international migrant as a person who has been living for one year or longer in a country other than the one in which he or she was born.

11The United Kingdom is home to the most diverse immigrant community in the world. It used to be said that the sun never set on the British Empire. Now, people from the many countries the British once ruled live inside the U.K.’s borders. Based on the Herfindahl-Hirschman index – which is widely used by biologists, ecologists, linguists, economists, sociologists and demographers to measure the degree of concentration of human or biological populations – the diversity of immigrant birth countries in the U.K. on a 0 to 100 scale is 97. For immigrants living in the U.S., it is 91.

22The French like to live all over the world – emigrants from France live in more countries than emigrants from any other nation. Using the Herfindahl index, the destination diversity of emigrants born in France is 95 on a 0 to 100 scale. It is 89 for American-born people living outside of the U.S. There are at least 1,000 French-born people living in each of 83 different countries and territories; the most popular destinations are Spain (220,000) and the United States (180,000).

33The Mexico-to-U.S. link is the most popular bilateral migration path in the world. As of 2013, more Mexican immigrants (13 million) were living in the U.S. than all immigrants to Russia combined (11 million). Russia has the second largest number of total foreign-born residents, after the United States, which has a total foreign-born population of about 46 million.

55The number of immigrants living in Spain grew nearly eightfold between 1990 and 2013, from less than 1 million to more than 6 million. Spain’s economy was soaring prior to the global recession, drawing migrants from Europe, Latin America, North Africa and elsewhere. Spain’s economic structure, immigration laws and demographics combine to create an attractive landing spot for prospective immigrants.

66The United Arab Emirates has the highest share of foreign-born people (84% of its population). The next three highest – Qatar (74%), Kuwait (60%) and Bahrain (55%) – also are in the Persian Gulf area. Immigrants in the UAE and neighboring countries come from many different places, but the largest numbers are from India, Bangladesh and Pakistan. The foreign-born population has grown by nearly 500% in recent decades, from 1.3 million in 1990 to 7.8 million in 2013.

7Countries with the fewest resources send lower shares of migrants. Although international migration is intrinsically tied with the search for jobs, people in the most impoverished countries may not have the money to finance a trip. The Central African Republic, the Democratic Republic of the Congo and Niger – countries with some of the lowest U.N. Human Development Index ratings and GDP per capita – all have less than 3% of their population living outside their borders.