In the continuing conflict in Iraq, Kurds frequently are mentioned alongside Iraq’s Sunni and Shia Muslim populations as one of the key groups involved in power struggles for which sharp religious divides have played a major part. But while the Kurds are a crucial part of Iraq’s political makeup, they are an ethnic group, not a distinct religious sect within Islam. Kurds are more appropriately compared to Arabs, the largest ethnic group in Iraq, or other regional ethnic groups such as Assyrians or Turkmen.

Much has been reported about the desire of many Kurds for greater autonomy or even independence from Baghdad. However, when it comes to religion, Kurds share a good deal in common with the Arab majority, especially Sunni Muslims. 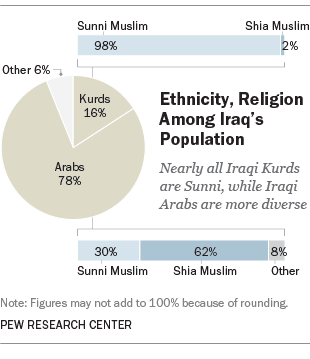 Overall, Arabs represent 78% of Iraq’s population, while Kurds are 16% and other, smaller ethnic groups constitute the remainder, according to a 2011 Pew Research survey. In terms of religious sect, Iraqi Arabs are somewhat split: Our survey found that most said they were Shia Muslims (62%), but about three-in-ten identified themselves as Sunnis (30%) and 6% said they were “just Muslim.”

Nearly all Iraqi Kurds consider themselves Sunni Muslims. In our survey, 98% of Kurds in Iraq identified themselves as Sunnis and only 2% identified as Shias. (A small minority of Iraqi Kurds, including Yazidis, are not Muslims.) But being a Kurd does not necessarily mean alignment with a particular religious sect. In neighboring Iran, according to our data, Kurds were split about evenly between Sunnis and Shias.

These three major religious and ethnic groupings in Iraq – Shia Arabs, Sunni Arabs and Sunni Kurds – share certain core religious beliefs. For example, each group professes near universal belief in God (Allah) and the Prophet Muhammad, and more than nine-in-ten members of each group say they fast during the Islamic holy month of Ramadan. Though there are some important distinctions in belief and practice between Sunni and Shia Muslims, the religious differences between Sunni Arabs and Sunni Kurds are comparatively small. For example, while Shia Arabs are united in their belief that visiting the shrines of Muslim saints is acceptable (98%). Fewer Sunni Arabs (71%) and Sunni Kurds (59%) support this practice.