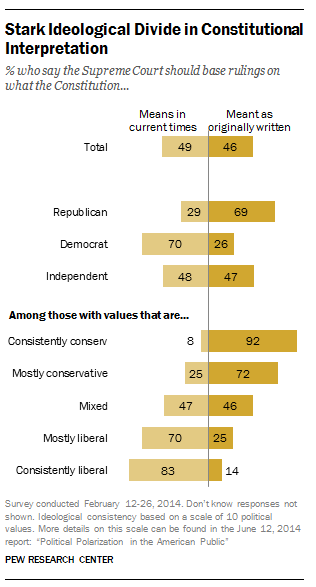 Democrats and Republicans remain deeply divided about how the U.S. Supreme Court should interpret the Constitution, according to a new analysis by the Pew Research Center. And there are many differences across demographic groups – especially when it comes to religious affiliation.

But Republicans—by more than two-to-one (69% to 29%)—say the justices should base their rulings on the Constitution’s original meaning rather than on what it means in current times. Democratic opinion goes the other way: 70% say the court should base its rulings on an understanding of the Constitution’s meaning in current times (26% say rulings should be based on the document’s original meaning).

These differing views of how the court should interpret the Constitution may account for some of the partisan differences in opinions of the court itself seen in the Pew Research Center’s latest survey.

And these opposing views on constitutional interpretation are even starker along ideological lines. Fully 92% of those who are consistently conservative on a 10-question scale of political values, along with 72% of those who are mostly conservative on this scale, say interpretation should be based on original intent. By contrast, 83% of those with consistently liberal political values, and 70% of those who are mostly liberal, say the justices’ rulings should be based on the Constitution’s meaning in current times (the items used in the 10-item scale can be found here in Pew Research’s report on Political Polarization in the American Public). 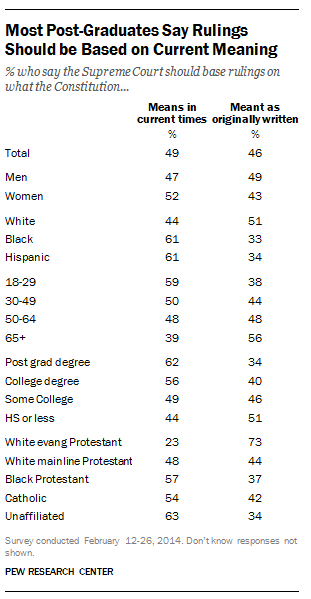 To some extent, the ideological split in the public’s views mirror the ideological divide of the court itself. The originalist position is most closely associated with Justice Scalia, one of the court’s conservative justices. Justice Scalia has often publicly stated his view that interpretation should be based on the document as originally written. Though there are differences among the conservative justices on this question, the view that the current meaning should be taken into account in constitutional interpretation is more closely associated with the positions of the court’s liberal justices.

Among the public, there are also sizeable differences in views of constitutional interpretation, not just by ideology but also by education, race, age and religion.

For example, while 62% of those with post-graduate degrees say constitutional interpretation should be based on the document’s meaning in current times, those who have not graduated from college are more divided on the question (46% current meaning, 49% as originally written). And while about six-in-ten African Americans and Hispanics (61% each) say the court should base its interpretation of the Constitution on the document’s meaning in current times, only 44% of whites say so.

But some of the starkest divides are along religious lines. Nearly three-quarters of white evangelical Protestants (73%) say the justices should base their rulings on the original meaning of the Constitution. By contrast, just 44% of white mainline Protestants, 42% of Catholics and 37% of Black Protestants share this view. By nearly two-to-one (63% to 34%), more of those who are unaffiliated with a religious tradition say justices should rule based on the Constitution’s meaning in current times. And — in contrast to other demographic differences — religious differences on this question remain significant even when partisanship and ideology are taken into account.