The vast amounts of oil extracted from Bakken shale in recent years, much of it in North Dakota, has helped the United States become the world’s top oil producer. The state has added about 100,000 workers since 2009, and the unemployment rate (2.6%) is well below the national average.

The fact that nearly all oil workers are men has received much attention. Indeed, recent census figures show that North Dakota led the nation in population growth over the past five years, at 12%, and men have accounted for two-thirds of it. From 2009 to 2013, the number of men in North Dakota increased by 14% (46,000), compared with a 9% increase among women (30,000). 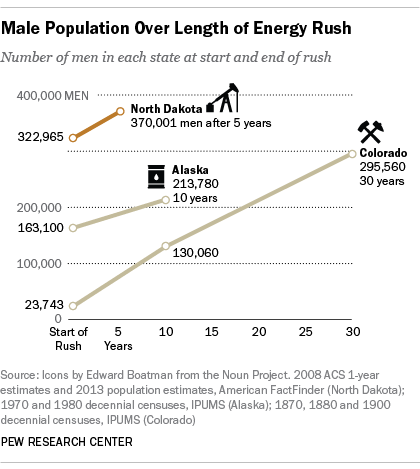 It made us wonder: How does North Dakota’s “man rush” compare with previous population booms? We thought back to the late 1800s with the silver rush in Colorado and Alaska’s oil boom in the 1970s, and then examined census data from those periods. It turns out that North Dakota’s population boom is not nearly as large as these two other moments in history. (No data were available for the 1849 California gold rush.)

Nearly 40 years ago in Alaska, construction began on the Trans-Alaska oil pipeline. Like North Dakota today, thousands moved to Alaska to work in the energy industry. From 1970 to 1980, the number of men in Alaska increased by 31% (51,000). But the population growth of women was even faster, with a 46% increase (60,000) over the same time period.

Today, North Dakota has the greatest concentration of men (51%) of any state besides Alaska (52%). Nationwide, men make up slightly less than half (49%) of the population and are a majority in only 10 states.