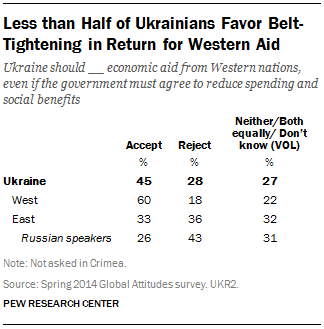 Ukraine will be at the top of the agenda when the leaders of the G7 advanced economies meet later this week in Brussels. Their deliberations are likely to focus on what their governments – Canada, France, Germany, Italy, Japan, the United Kingdom and the United States – can do to bolster the newly elected Ukrainian government in the face of continued violence by pro-Russian sympathizers within the country. But the effectiveness of any such Western aid may depend on fundamental reform of the Ukrainian economy, which is mired in recession.

In the end, the success of any G7 initiative hinges on what the Ukrainian people are able and willing to do for themselves. But support for economic reform is not widely embraced among the Ukrainian public, according to a new Pew Research Center survey. Just 45% of Ukrainians say the country should accept economic aid from Western nations even if their government must agree to reduce spending and social benefits in return. Fully 28% reject such help if it is dependent on cuts in Ukrainian government outlays. Another 27% voice the view that neither option is acceptable, or that they want both, or that they have no opinion. (The question was not asked in Crimea.)

Support for belt-tightening in return for aid is particularly low among Ukrainians ages 50 and older. Just 41% are willing to accept any such bargain. But more than half (53%) of younger Ukrainians support a trade-off.

The Ukrainians’ lack of enthusiasm for economic aid comes at a time when their economic outlook is bleak. The Ukrainian economy is expected to contract by 5 percent this year as the country faces an overvalued exchange rate, a substantial budget deficit, and big losses in the energy sector that have put Ukraine on a “highly unsustainable course,” according to a recent International Monetary Fund report.

To help Ukraine reverse economic course, the IMF has already approved a $17 billion emergency rescue package that unlocks an additional $15 billion in international financing, including loans and other funding from the U.S., Europe and the World Bank.

In return, the government in Kiev has agreed to substantially increase both retail gas and heating prices, 56 and 40 percent in 2014, respectively, and 20–40 percent in 2015–17. It will cancel pension and public sector wage increases planned for this year and freeze public sector hiring. It will abandon a planned cut in the sales tax, hike duties on diesel fuel and impose new sales taxes on pharmaceutical and medical products.

But such reforms have a history of foundering in Ukraine. In the past six years, two previous IMF-supported economic restructuring efforts have gone off track.

The complex politics of economic reform within Ukraine are evident in the regional and ethnic discrepancies in public willingness to suffer additional short-term economic pain in the hope of long-term gain. Six-in-ten Ukrainians living in the country’s west back reductions in public spending and benefits in return for Western financial assistance. Just 33% of Ukrainians in the embattled eastern oblasts favor such a bargain. Moreover, 43% of Ukrainians living in the east who only speak Russian oppose subsidy losses to obtain international aid, while only 26% accept any quid pro quo. (For regional breakdowns by oblast, see https://www.pewresearch.org/global/2014/05/08/ukraine-by-region/.)

So while the geopolitics of Ukrainian aid may dominate G7 discussions in Brussels, it may be the regional and ethnic politics of additional austerity that determine whether such assistance ultimately proves successful.

For more on the current situation in Ukraine, see our May report: “Despite Concerns about Governance, Ukrainians Want to Remain One Country.”