As the 2016 presidential campaign ramps up, Republicans and Democrats have different wish lists when it comes to what traits they want in a candidate. Military service far and away tops the list for Republicans, while a significant share of Democrats would like to see a woman at the top of the ticket, a choice that has much less appeal for the GOP, according to a Pew Research Center survey conducted last month. 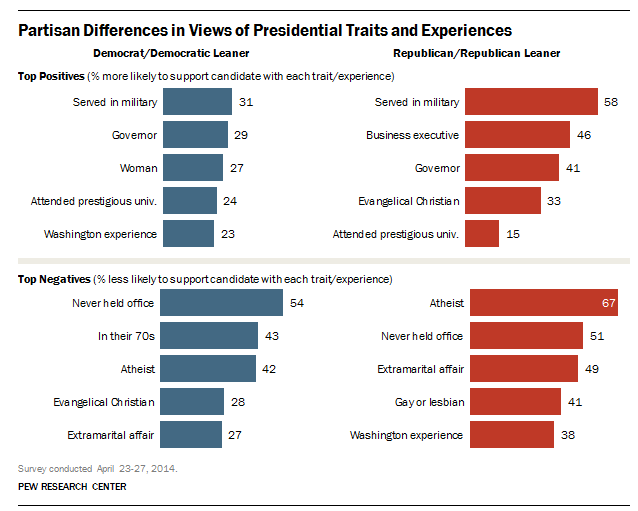 With Hillary Clinton looming large over the potential Democratic presidential field, 27% of Democrats say they would be more likely to vote for a woman presidential candidate, the third most positive attribute for Democrats. A candidate being a woman ranks highly as a positive trait among just 11% of Republicans.

The parties differ in evaluating the value of business experience. For Republicans and Republican leaners, it is the second most popular trait, with 46% saying they would be more likely to support a business executive running for president. The trait does not crack the top five for Democrats and Democratic leaners, with as many who say they would be less likely (20%) as more likely (21%) to back a business candidate.

A gay or lesbian candidate would have trouble winning the Republican nomination: 41% of Republicans and Republican leaners would be less likely to vote for a gay candidate compared with 16% of Democrats and Democratic leaners. 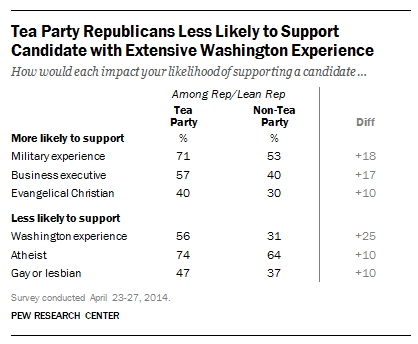 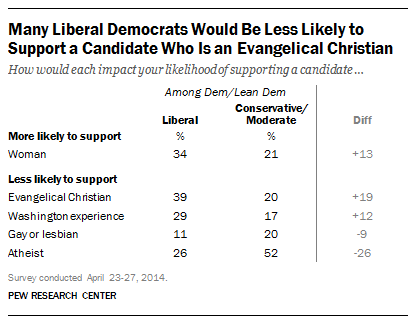 Liberal Democrats are the most likely to say a candidate being a woman would increase their likelihood of support (34%); this compares with 21% of conservative and moderate Democrats.

Partisan divide grows over value of Washington experience
What voters want in a president today, and how their views have changed
Republicans and Democrats sharply divided on how tough to be with Russia
5 key findings about faith and politics in the 2016 presidential race
5 facts about Democrats in 2015