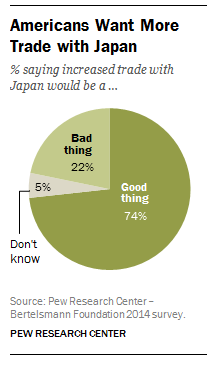 President Obama heads to Tokyo on Wednesday for the first state visit to Japan by an American president since Bill Clinton in 1996. As the initial stop on a weeklong tour of Asia that has long been in the making, the three day trip will provide the president and his Japanese counterpart, Prime Minister Shinzo Abe, with a crucial opportunity to discuss the Trans-Pacific Partnership (TPP). While trade officials from the two countries have already met in Washington in an attempt to resolve some of the thornier details of the free trade pact, publics in both nations have expressed support for the deal to go forward.

A recent survey from the Pew Research Center found that a majority of Americans (55%) believe the Trans-Pacific Partnership is a good thing, while just 25% think the agreement will be bad for the country and 19% don’t have an opinion. While more Democrats (59%) and independents (56%) support the trade pact, roughly half of Republicans (49%) also see U.S. membership in the TPP as positive. Americans ages 18-29 are also more likely than their older counterparts to view the agreement favorably.

In comparison, there is less enthusiasm for growing commerce with China, although slightly more Americans see doing business with China as a positive rather than a negative (51% good vs. 45% bad).

The Japanese are about twice as likely to favor the TPP agreement than not. Roughly half of Japanese (52%) support Japan’s participation in the TPP, according to a November 2013 poll by Asahi Shimbun, one of Japan’s main national newspapers. Only 25% of respondents would like to see Japan reject the pact.