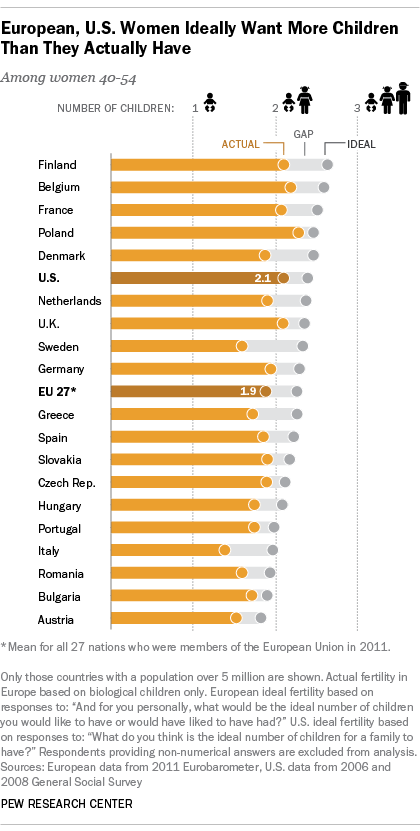 In many developed nations, the average number of children that a woman has in her lifetime is now less than two, falling short of the approximate fertility necessary for a generation to “replace” itself. While there are many factors driving what some deem a ‘Baby Bust’ in Europe and—to a lesser extent—the U.S., a lack of desire for children is not among them.

Fully 87% of women in 27 European Union (EU) member states reported that the ideal family size for them personally is two or more children, according to a 2011 Eurobarometer survey. Some 57% said that two is the ideal, and an additional 30% said three or more is ideal. These numbers are based on the 92% of respondents who provided a numerical ideal; the rest said that “there is no number, it depends” or said “don’t know.” Some 87% of EU men who had a preference also reported that their own ideal family would include two or more children.

While the U.S. has been somewhat immune to the low fertility rates that have raised concerns in Europe, actual U.S. fertility also tends to fall below the ideal. Some 52% of American women (who gave numerical responses) said their ideal is two children, and an additional 44% said that three or more children is their ideal. (While 86% of women gave numerical responses to this question, 14% reported that the ideal family size was “as many as [someone] wants.”) But 40% of U.S. women nearing the end of their childbearing years have fewer children than their ideal.

These U.S. results are based upon 2006-2008 data from the General Social Survey, which asks a more general question than that posed in the EU: “What do you think is the ideal number of children for a family to have?” Analyses suggest that this “general ideal” question elicits results similar to the “personal ideal” question asked in the EU, but nonetheless, caution should be used when comparing the U.S. and EU on these slightly different measures of ideal fertility.

So what’s driving this gap between ideal and actual family size?  Among others things, delays in childbearing, which may be caused by increases in educational attainment, or by the lack of a suitable partner, may play a role. Starting childbearing at a later age means that there are fewer years for a woman to meet her fertility ideals, plus it increases the risk of age-related infertility.

Then there are direct economic factors, which are enough to give any potential parent pause. While many European countries offer more financial assistance via parental leave and other subsidies for parents than in the U.S., it’s still the case that raising kids is expensive. In both places, birth rates appear linked to economic well-being, with higher fertility in economic good times, and lower fertility in recessions.

It’s also important to note that “actual fertility” as defined by the Eurobarometer does not include adopted or step-children, and a small share of women near the end of their childbearing years may still have another child.