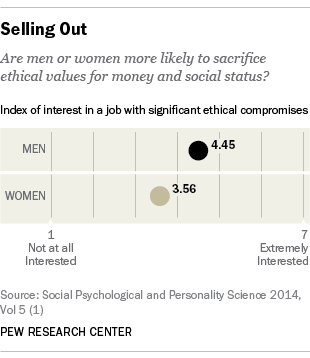 Here’s another possible explanation why there are so few cracks in the corporate glass ceiling:  Men seem far more willing than women to sacrifice their ethical values in exchange for money or success on the job.

Or at least that’s the claim of two researchers who conducted a series of experiments that found women were less inclined than men to sell out their values in order to win bonuses and promotions, keep down workplace rivals, curry favor with superiors or otherwise advance their own careers.   “We propose that women, more than men, find ethical compromises unacceptable,” wrote researchers Jessica A. Kennedy of the University of Pennsylvania and Laura J. Kray of the University of California, Berkeley, in the latest issue of the journal Social Psychological and Personality Science.

There are other theories as to why only about 4% of senior executives in investment banking are women, as are 4.2% of chief executive officers at Fortune 500 companies (that percentage will  tick up on January 15 when Mary Barra takes over as General Motors’ new CEO).

Those theories include the lack of advancement opportunities for women, a paucity of female mentors and gender discrimination. A recent Pew Research Center study on women and work highlighted how family pressures hampered working women from advancing as quickly or as far on the job as men.

In their first study, Kennedy and Kray recruited 65 women and 38 men online using the Amazon Mechanical Turk website. The participants read 14 vignettes that described compromises of ethical values in order to make more money or enhance status on the job.  For example, one vignette “described assigning a talented subordinate to peripheral projects and publicizing the subordinate’s mistakes in order to prevent this person from receiving too much respect and admiration,” they wrote.

Then, study participants were asked to rate their reaction to each vignette on a seven-point scale in terms of how objectionable they felt it was, how upsetting it made them feel, how morally acceptable they thought it was and four other factors.  The researchers averaged the 14 individual ratings, which ranged from 1 (“not at all”) to 7 (“very much,”) to arrive at a final score.

“As hypothesized, women experienced more moral outrage and perceived less business sense than men when confronting ethical compromises made for either monetary or social status gains,” they wrote.

In the second experiment, 94 male and 84 female undergraduate students were read descriptions of jobs in consulting, wealth management and private equity firms. Each job included a description of an ethical issue that an employee would confront, for example, whether to invest in money-making companies “that used unethical business practices to produce profits.”

But there was a twist:  After that brief description, some respondents were told that “the company’s norms favored profits”—a big hint that their success on the job would be measured in terms of dollars and cents and not their adherence to ethical standards.  Other respondents were told that the company favored choosing “in favor of ethics.”  A third group—the control group—got no clue about the company’s preferences.

Again, they found that “women reacted more negatively than men to ethical compromises. When a job entailed ethical compromises, women reported less interest in it than men did, despite exhibiting no difference when the job did not entail ethnical compromises.”  In fact, women on average rated their interest almost a full point below men on the seven-point scale (4.45 vs. 3.56 for women).

“It’s not that men are totally into ethical compromises – people generally report negative reactions to them – but women’s reaction is more negative than men’s,” Kennedy wrote in an email

In a third study,106 college students (52 women and 54 men) were given a list of more than two dozen words related to business or law such as “Corporation,” “Attorney,” “Profits” and “Prosecution.”  Then they were told to associate them with words implying a moral judgment or condition such as “Fair,” “Honest,” “Corrupt” and “Ruthless.”

The results showed that women held significantly more negative attitudes about the morality of business than men—more evidence, these researchers claim, that “women’s relatively strong implicit association between business and immorality may explain why they are underrepresented in business careers.”