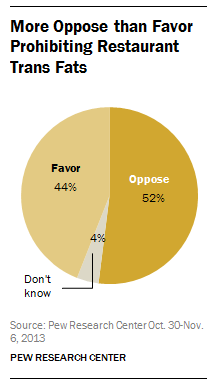 The Food and Drug Administration’s new proposal to severely restrict trans fats in the U.S. food supply raises questions about the role the government should play in addressing broad public health concerns. A new Pew Research Center survey suggests that the public is divided over this kind of policy.

The nationwide survey by the Pew Research Center, conducted Oct. 30-Nov. 6, 2013 among 996 adults nationwide, finds 44% in favor of prohibiting restaurants from using trans fats in foods, while 52% oppose the idea. While this is not the sweeping policy proposed by the FDA today, a number of cities have put such restrictions in place. This question is part of a Pew Research Center survey on how Americans view public health and obesity that will be released early next week.

Republican opposition is not counterbalanced by comparably strong support for regulation among Democrats. In fact, Democrats are largely divided on the question: 51% favor and 45% oppose prohibiting trans fats in restaurants. Even among liberal Democrats just 47% favor the idea while 50% are opposed.

There is a substantial difference of opinion between women and men: Half of women favor banning trans fats in restaurants compared with just 37% of men.  But there are no significant differences of opinion between younger and older Americans, whites and non-whites, or college grads and those without a college education.

For questionnaire results, click here. Other questions from this survey are held for future release.