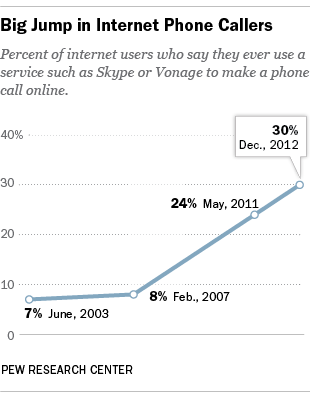 As with many online activities, the young and the upscale were more likely than other internet users to have made online phone calls. The Project survey conducted between November 14-December 9, 2012 found that 42% of those with college or graduate degrees have placed online phone calls; 37% of those living in households earning $75,000 or more had done so; and 40% of those ages 18-29 had done so.

This is one of many ways that the digital age is changing what it means to make a phone call and the ways in which people make calls. You can read more about the Internet Project’s research on how people use their mobile phones here.

Cell phone ownership hits 91% of adults
Phone Calls on the Net
Make Calls Online
21% of Americans without health insurance do not use the internet
What our transition to online polling means for decades of phone survey trends
Defining generations: Where Millennials end and Generation Z begins
Growing Share of Americans Say They Plan To Get a COVID-19 Vaccine – or Already Have
Quiz: Are you a Core Conservative? A Solid Liberal? Or somewhere in between?
Most Americans Support Tough Stance Toward China on Human Rights, Economic Issues
In their own words: What Americans think about China