Men and women have something new to disagree about: drone strikes. A global Pew Research Center survey finds a large gender gap in attitudes about this signature Obama administration anti-terrorist tool. 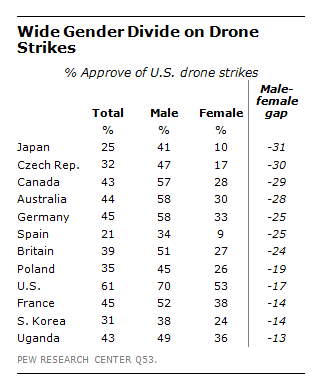 In Japan, for example, 41% of men approve of drone attacks, compared with just 10% of women. Double digit gender gaps are also found in six of the eight EU nations polled, as well as Australia, Canada, the U.S., South Korea and Uganda.

Gender gaps are also often seen in global surveys over the use of military force, with women far less likely than men to say that force is sometimes necessary in the pursuit of justice. But the gender difference over drone strikes is unusually large.

Overall, most publics around the world oppose the U.S. drone campaign. In 31 of 39 nations surveyed this spring by the Pew Research Center, at least half of those questioned disapprove of the U.S. conducting drone missile strikes targeting extremists in places such as Pakistan, Yemen and Somalia. The only three countries where majorities support the drone campaign are Israel (64% approve), Kenya (56%), and the U.S. itself (61%). In some countries, such as France, Germany and Spain, there are also sharp ideological divisions on this issue, with those on the political right far more supportive than those on the left.