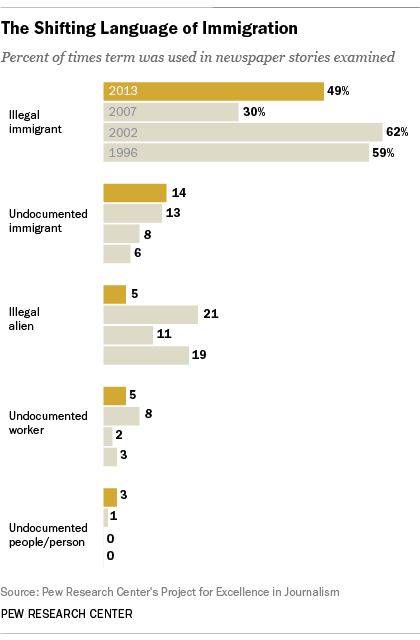 Even with several major news organizations deciding to reduce or ban its use, the term “illegal immigrant” is still the phrase newspapers most often use to describe foreigners living in the United States without proper documentation. But over time, there have been some shifts in the language applied to those at the heart of the immigration debate, as words like “undocumented” or “unauthorized” have begun showing up more frequently.

With Congress now considering a major immigration bill, we compared newspaper language in the period from April 15-29 in 2013 with three other two-week periods—in 1996, 2002 and 2007—when immigration-related legislation was also in the news.

During all four time periods, the term used most frequently in newspapers was “illegal immigrant,” although there was some ebb and flow, according to Pew Research’s LexisNexis search of 19 related terms in almost 9,000 articles. This year, we found the phrase “illegal immigrant” accounted for 49% of the terms examined. It accounted for 30% of the terms in 2007, around the time Congress tried and failed to pass immigration reform. And it represented 62% of terms in 2002 when Congress passed legislation ordering Immigration and Naturalization Service to link their databases together.

This year, several news organizations announced a ban on the term “illegal immigrant,” including The Los Angeles Times and The Associated Press, because they said it lacked precision and broadly labeled a large group. In fact, one former journalist has been campaigning to change the way Americans and newsrooms talk about immigration, specifically urging them to rethink the use of “illegal immigrant.” Generally speaking, the trend is toward a diminishing use of the word “illegal” to describe the people here without proper documentation.

Trump voters want to build the wall, but are more divided on other immigration questions

What Americans want to do about illegal immigration

Unauthorized Immigrants: Who they are and what the public thinks

5 Facts about Republicans and immigration