With John Kerry visiting Paris this week on his first diplomatic trip as Barack Obama’s Secretary of State, confidence in the president of the United States, as measured in a spring 2012 survey, remains very high in France. (See our infographic for more information on how countries on Kerry’s tour view America.)

In 2012, 86% of those surveyed in France expressed confidence in Obama to do the right thing regarding international affairs; only 14% said they had little or no confidence in him. This was little changed from 2009, when Obama first entered office.

The dramatic change in views of the U.S. president from 2008 to 2009 was consistent across most of Europe and also contributed to higher ratings for the U.S. in general. (See: Confidence in Obama Lifts U.S. Image Around the World.) Since 2009, however, global opinion of the U.S. and its president has slipped somewhat amid dissatisfaction with Obama’s international policies. Read more 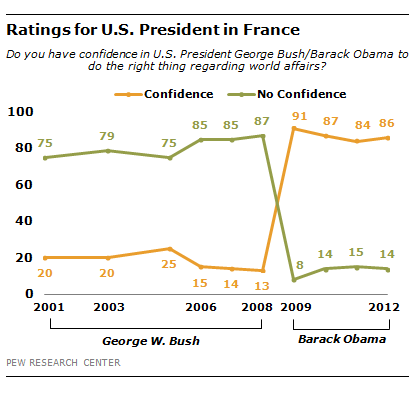