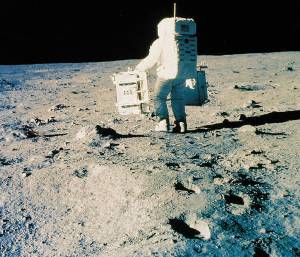 Four decades after the first American astronauts walked on the moon, that historic accomplishment has lost some prominence in the eyes of the public.

Ten years ago, when asked to name America’s greatest achievement of the 20th century, the specific accomplishment cited most frequently — at 18% — was space exploration or the moon mission. Overall, 47% cited any achievement in science, medicine or technology, including space.

But in May of this year, when the public was asked to name the greatest U.S. accomplishment of the past 50 years, somewhat fewer (12%) specifically mentioned space exploration or getting a man to the moon as the greatest achievement. Only about a quarter (27%) mentioned an achievement in science, medicine or technology. (For more from this survey, see “Public Praises Scientists; Scientists Fault Public, Media,” July 9, 2009.)

In the new survey, nearly as many people point to the election of a black president (10%) as cite the space program as the greatest U.S. accomplishment of the past half-century. In addition, a third (33%) offer no response — or say “nothing” when asked about the top national achievement — compared with 24% in the 1999 survey.

Notably, Baby Boomers — Americans born between 1946 and 1964 — are about as likely to rate space exploration as the nation’s greatest accomplishment as they were a decade ago (17% in 1999, 19% in 2009). But a smaller proportion of those in the Greatest or Silent Generations cite space exploration as the top U.S. achievement than did so in 1999 (21% then, 13% today). Somewhat fewer members of Gen X also point to space exploration or landing a man on the moon as the greatest American accomplishment than did so a decade ago (17% then, 9% today).

Just 5% of Gen Y — whose oldest members were born nearly a decade after Neil Armstrong became the first man to step on the moon (1977 or later) — cite space as the nation’s greatest achievement. Gen Y is the only age cohort in which a significantly higher percentage (14%) cites the election of Barack Obama as the first African American president than cites space exploration as the greatest achievement of the last half-century.