As a new generation of Americans begins to take shape and move toward adulthood, there is mounting interest in their attitudes, behaviors and lifestyle. But how will this generation change the demographic fabric of the United States? A new Pew Research Center analysis of Census Bureau data finds that the “post-Millennial” generation is already the most racially and ethnically diverse generation, as a bare majority of 6- to 21-year-olds (52%) are non-Hispanic whites. And while most are still pursuing their K-12 education, the oldest post-Millennials are enrolling in college at a significantly higher rate than Millennials were at a comparable age. 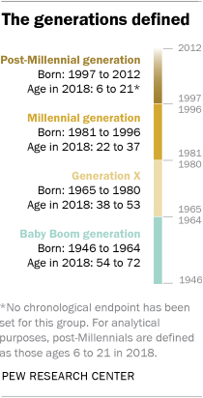 The generation labeled “post-Millennials” in this report – referred to elsewhere as Generation Z, the iGen or Homelanders – includes those born after 1996. Pew Research Center uses the label “post-Millennials” as a placeholder until more consensus emerges as to their name.

This report compares the post-Millennials in 2018 with earlier generations when they were ages 6 to 21, examining their demographic characteristics as well as those of their parents and households. 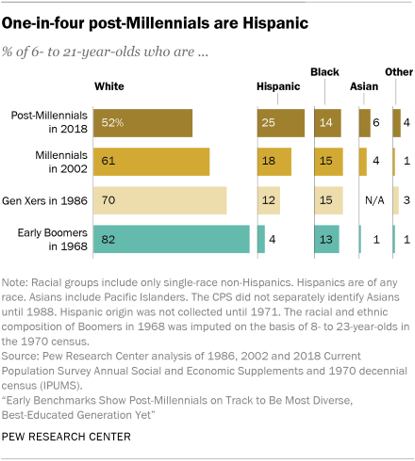 Asians account for 6% of the post-Millennial generation, up slightly from the 4% of Millennials in 2002 who were Asian. The remaining 4% of post-Millennials are non-Hispanics of another racial identity, mainly youth of two or more races. 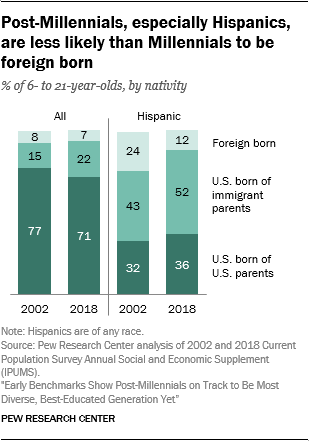 In terms of sheer numbers, the Millennial generation was shaped to a much larger extent by young immigrants than the post-Millennials have been. When Millennials were ages 6 to 21 in 2002, they numbered 65.3 million.4 Their ranks that year included 5.0 million immigrants. By contrast, only about 4.4 million of the 66.5 million post-Millennials are immigrants – a pattern that more closely mirrors the experience of Gen X.

Even with the diminished flow of immigrants into the U.S., the racial and ethnic diversity of the post-Millennial generation is expected to increase in future years as new immigrants join their numbers. Today’s 6- to 21-year-olds are projected to become majority nonwhite in 2026 (when they will be ages 14 to 29), according to Census Bureau projections. 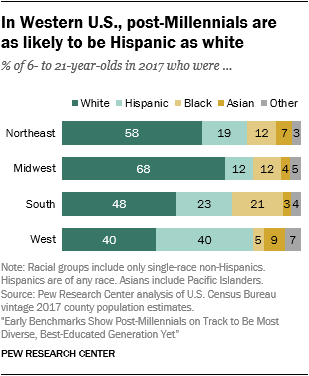 In the West, post-Millennials are just as likely to be Hispanic as non-Hispanic white (both 40%). This stands in contrast to older generations. Among those residing in the West, 45% of Millennials, 50% of Gen Xers and 64% of Boomers are non-Hispanic white. Minority representation among post-Millennials is lowest in the Midwest, where roughly a third (32%) of 6- to 21-year-olds are racial or ethnic minorities.

While it’s still much too early to draw conclusions, initial signs suggest that post-Millennials are on track to become the most well-educated generation yet.

One indicator suggests that younger post-Millennials are behind where Millennials were in terms of their progress in K-12 education. In 2017, 30% of post-Millennials ages 6 to 17 were enrolled below the “modal grade,” which is the typical grade a child is enrolled in given his or her age. By comparison, a quarter of Millennials and Gen Xers were enrolled below the modal grade in 2002 and 1986, respectively. This indicator is of value because it can foreshadow subsequent dropping out of school, particularly if the student is behind in school due to grade retention. It’s unclear from this data whether students are behind grade-wise due to being held back in school or whether their parents elected to have them begin kindergarten at an older age.

Beyond K-12 education, post-Millennials are more likely than earlier generations to be pursuing college. In 2017, 59% of 18- to 20-year-olds who were no longer in high school were enrolled in college. Among Millennials and Gen Xers at similar ages smaller shares were pursuing college (53% and 44%, respectively).

Some of the post-Millennial gain stems from Hispanic youth. More than half (55%) of Hispanic 18- to 20-year-olds who were no longer in high school were enrolled in college last year. Less than half of their Millennial (34%) and Gen X (28%) peers were pursuing college at a similar age.

Black post-Millennials are also outpacing the previous generations of black youth in terms of college enrollment. Among blacks ages 18 to 20 who were no longer in high school, 54% were enrolled in college in 2017, compared with 47% of black Millennials in 2002 and 34% of Gen Xers in 1986.

Post-Millennial women are showing major strides in college enrollment. In 2017, 64% of women ages 18 to 20 who were no longer in high school were enrolled in college. That’s up from 57% of similarly aged Millennials in 2002 and up substantially from 43% of Gen Xers in 1986. The trend, while more modest, has been upward among men as well.

It’s important to point out that future immigration patterns may affect the educational outcomes of post-Millennials, so these generational comparisons represent a current snapshot.

Post-Millennials are slower to enter the labor force 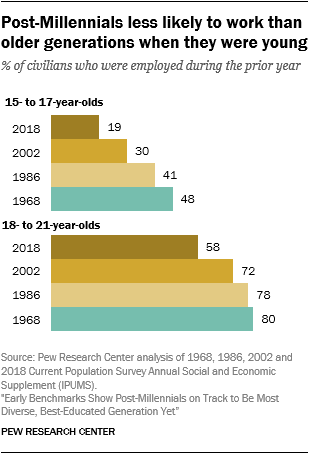 Over the decades the earnings of American workers have increased modestly, and teens and young adults are no exception. If they worked full-time in 2017, a 15- to 17-year-old typically earned about $5,000 (the median). Adjusting for inflation, a similar early Millennial earned slightly less, $4,200. The median earnings for a full-time 18- to 21-year-old today is $19,000, somewhat higher than the median pay of a similarly aged full-time Millennial worker in 2002 ($16,700).

A common indicator of “at-risk” behavior in the transition to adulthood is the share of youth who are neither enrolled in school nor working. Youth who are detached from school and the workplace may not be acquiring valuable learning experiences and networking opportunities. Post-Millennials are less likely to be detached than earlier generations. The shift has been more significant among young women. Only 9% of 16- to 21-year-old post-Millennial women are detached in 2018. About 12% of Millennial women and 16% of Gen X women were neither in school nor working at a comparable age. Post-Millennial women who are detached are far less likely to be married than detached Gen X women were at a similar age (12% vs. 37%).

Steady gains in college completion among U.S. adults are reflected in the households of post-Millennials. Fully 43% of post-Millennials ages 6 to 17 have at least one parent with a bachelor’s degree or more education. This compares with 32% among similarly aged Millennials in 2002, 23% among Gen Xers in 1986 and only 16% among early Boomers in 1968. 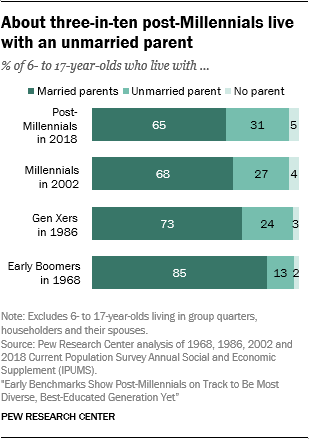 Of those children and teens who are living with two married parents, most live in dual-earner households. Slightly fewer post-Millennials have two working parents compared with Millennials in 2002 (63% vs. 66%). In 1986, 59% of Gen X youth (ages 6 to 17) with married parents had both parents in the labor force, up substantially from 37% among similarly aged Boomers in 1968.

Post-Millennials have the same number of siblings living with them as Millennials did at a similar age – 1.5, on average. This is down substantially from what the early Boomers experienced in their youth. Among those ages 6 to 17 in 1968, the average number of siblings was 2.6. By the time the Gen Xers came along, that number had fallen to 1.6 (in 1986). 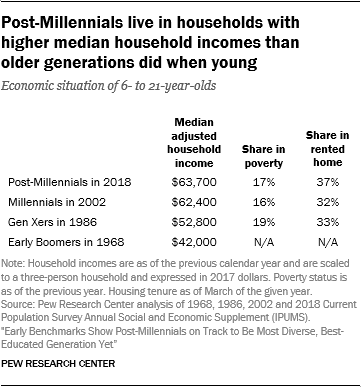 Some measures of economic well-being indicate that post-Millennials are growing up in more affluent circumstances than previous generations did. The median or typical household income of 6- to 21-year-olds is $63,700. After adjusting for inflation the typical Millennial grew up in a household with a slightly lower income level ($62,400). The typical household income resources of Gen Xers ($52,800) and early Boomers ($42,000) growing up were significantly below these levels.8 By the official poverty measure, 17% of post-Millennials live in families that are below the poverty line.9 This may exceed the share of Millennials in poverty in 2002 (16%) but is below the share of Gen Xers in 1986 (19%).

References to whites, blacks and Asians and Pacific Islanders include only those who are non-Hispanic and identify as only one race. Hispanics are of any race. Nonwhites include blacks, Hispanics, other races and people who identify with more than one race.

“Full-time work” refers to working 35 hours per week or more in the past year.