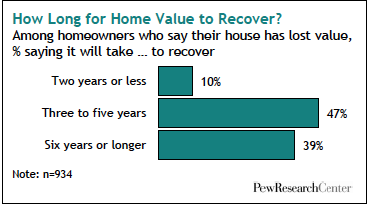 Among those who say their houses have lost value during this recession, the overwhelming majority believe it will take at least three years for values to return to pre-recession levels. This includes 47% who say they expect it will take three to five years and 39% who say it will take six years or longer. Just 10% say they expect a recovery in two or less years. Despite this, eight-in-ten Americans agree that a house is the best long-term investment the average person can make. (However, the share who “strongly agree” with this statement is just 39% now, down by 10 percentage points from the share who said the same in a 1991 survey.)

← Prev Page
Page12Page13Page14Page15Page16Page17Page18You are reading page19Page20Page21Page22
Next Page →
How Long for Home Value to Recover?