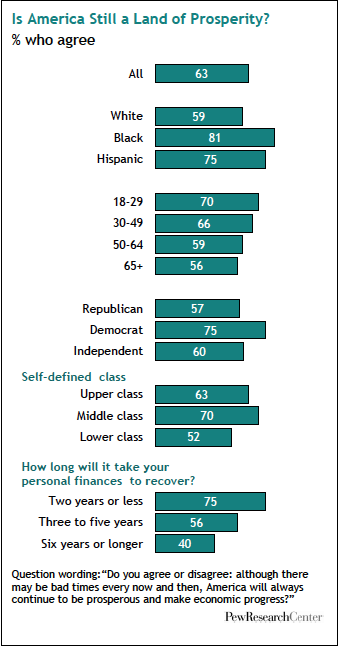 Most Americans (70%) believe that the recession has inflicted major changes on the U.S. economy, but most (61%) say that these changes will prove to be temporary. Older adults are more downbeat than younger adults (21% of those ages 50 and older see major, permanent changes, compared with just 13% of those ages 18-24); college graduates are more pessimistic than whose with a high school diploma or less education (22% of the former see major, permanent change, compared with 14% of the latter); and Republicans are more pessimistic than Democrats (22% vs. 12%).

← Prev Page
Page1Page2Page3Page4Page5Page6Page7You are reading page8Page9Page10
Next Page →
Is America Still a Land of Prosperity?