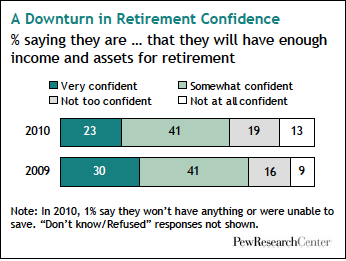 Even though the stock market has rallied by more than 50% from its recession-era bottom in March 2009, Americans have continued to lose confidence in their ability to afford retirement. Some 32% of adults now say they are “not too” or “not at all” confident they will have sufficient income and assets for retirement, up from 25% who said the same in February 2009. This uncertainty is greater among younger and middle-aged adults than among older adults. It is also greater among adults with low incomes.