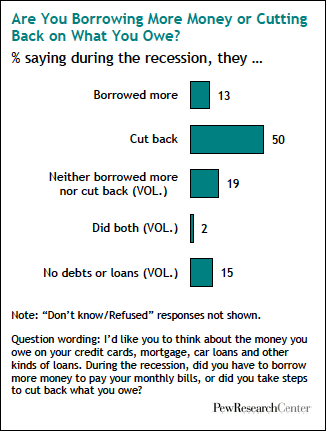 More than six-in-ten (62%) Americans say that since the recession began, they’ve cut back on household spending. Half say they have reduced the amount they owe on mortgages, credit cards, car loans and other borrowing. Of those who have savings or retirement accounts, more than four-in-ten (42%) say they’ve adopted a more conservative approach to saving and investing, compared with just 8% who say they’ve taken a more aggressive approach.

← Prev Page
Page1Page2You are reading page3Page4Page5Page6Page7Page8Page9Page10
Next Page →
Are You Borrrowing More Money or Cutting Back on What You Owe?