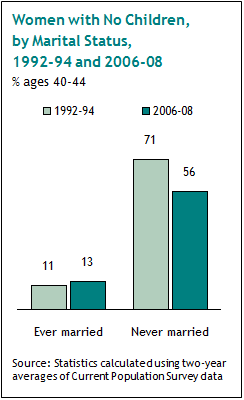 Among 40-44-year-old women currently married or married at some point in the past, 13% had no children of their own in 2008, a small increase from 11% in 1994. The childless rate among these women rose for whites, blacks and Hispanics, with the largest increases among black and Hispanic women. A rising share of births is to women who never married, and this is reflected in a decline in childlessness among this group. Among women in this group, 56% were childless in 2008, compared with 71% in 1994. The childless rate fell for never-married white and black women.4 Data are incomplete for Hispanic and Asian women.