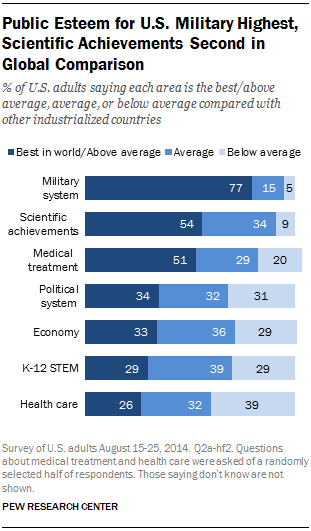 Science holds an esteemed place in the public imagination and in the minds of professionals. Americans are proud of the accomplishments of their scientists in key fields and, despite considerable dispute about the role of government in other realms, there is broad public support for government investment in scientific research.

At the same time, scientists and citizens are critical of the K-12 education system when it comes to the quality of teaching about science, technology, engineering, and math (called STEM subjects). Scientists are also pessimistic about the state of funding for their research, even as the public largely supports it.

This chapter covers the core findings about the overall place of science as found in the Pew Research survey of the general population and that of a representative group of scientists who belong to the American Association for the Advancement of Science.

The Public Image of the U.S. as a Global Leader in Key Sectors

In the survey, we wanted to understand the public’s views about science in the context of other key American institutions and industries, including some outside the realm of science and technology. A mixed picture emerges in people’s responses as they generally value U.S. scientific achievements but are critical about the state of science and math education to primary and secondary school students.

The public’s views of how the education system is teaching science, technology, engineering, and math (called STEM) to K-12 students is considerably less glowing. About three-in-ten (29%) adults consider U.S. STEM education for grades K-12 to be above average or better compared with other industrialized countries, another 39% say it is average and 29% say it is below average.11

Public assessments of the U.S. medical system vary strongly, depending on the focus of the question. Half of the survey respondents were asked to rate “U.S. medical treatment” while the other half were asked about “U.S. health care.” Americans’ views of “medical treatment” in the U.S. were considerably more positive than their views of “health care.” Some 51% of those asked about medical treatments rated it the best in the world or above average. On the other hand, only 26% said U.S. “health care” was the best or above average. These differences likely arise from different connotations associated with each term. Those assessing “treatments” might have been thinking about medical advances in fighting diseases and creating medical devices and felt the science community is making notable progress. On the other hand, those asked about “health care” might have been making a broader assessment about the system of providing health care in America, the subject of considerable public dispute in recent years. 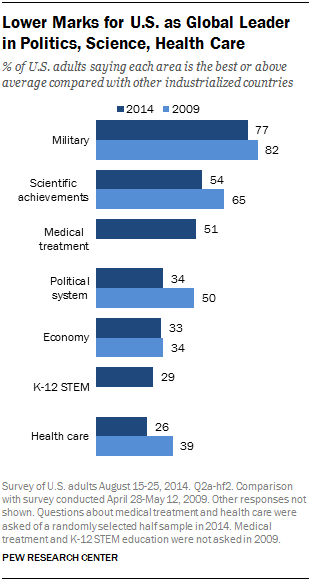 Americans’ views about the relative rank order of the topmost institutions is about the same as it was in 2009, when Pew Research last asked the public to rate sectors in this way. But, the public is less enthusiastic about the standing of the U.S. compared with other industrialized countries in several areas including the political system, scientific achievements, and health care.

Public esteem for the military is down modestly from 2009 although most Americans still hold the military in high regard. Fully 77% of adults say the military is among the best or better than average compared with other industrialized countries, down from 82% in 2009.

The public’s still-positive ratings of U.S. scientific achievements are followed closely by those for medical treatments with 51% saying it is the best in the world or above average. (The 2009 survey did not ask about medical treatment.)

By contrast, just 26% of adults today say that U.S. “health care” is above average or the best in the world, down 13 points from 39% in 2009.12 Political differences explain much of this change. In 2009, Republicans and independents who lean to the Republican Party were much more inclined than their Democratic counterparts to see the U.S. health care system in a positive light (55% vs. 28% of each group, respectively, said it was the best in the world or above average). But Republicans’ opinions about the place of U.S. health care in a global context have dropped sharply since 2009, while views among Democrats’ have dropped a more modest 6 points. These partisan differences are likely related to the debate over the Affordable Care Act, also called “Obamacare,” during the same period. As a result, both groups now hold roughly similar views of how U.S. health care stacks up in a global context.

People’s perceptions of the U.S. economy in global comparison have held steady. A third of adults (33%) says the U.S. economy is the best or above average relative to other industrialized countries, roughly the same as in 2009 (34%).

There are no or only modest differences in assessments of K-12 STEM education by gender, age, or political leanings. But unlike ratings of U.S. scientific achievements, education is inversely related to ratings of STEM education for grades K through 12: 35% of college graduates say K-12 STEM is below average compared with other nations while 23% of those with no more than a high school diploma say the same. 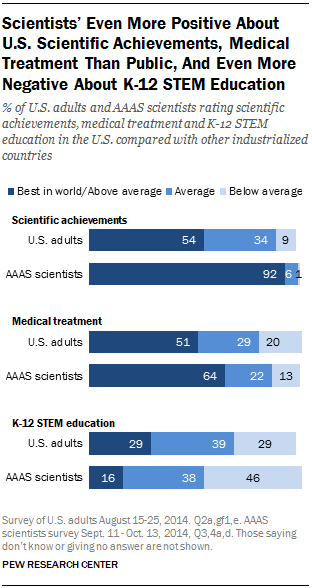 Scientists are far more positive about the country’s scientific achievements and its medical treatments than the general public. But, scientists are also more downcast about K-12 STEM education than the public.

Fully nine-in-ten (92%) AAAS scientists say scientific achievements in the U.S. are the best in the world (45%) or above average (47%). In 2009, 94% of scientists said the same. Scientists are also positive about the global standing of U.S. medical treatment; nearly two-thirds of scientists (64%) consider U.S. medical treatment to be above average or better than other industrialized countries. About half of the general public (51%) says the same.

Scientists are Less Upbeat Than They Used To Be 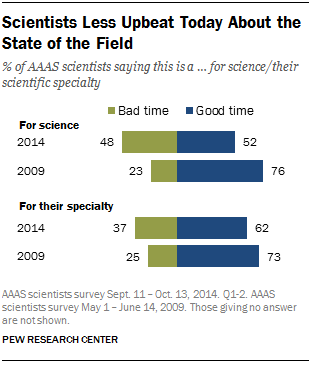 Despite their overall positive views, scientists are more downbeat about the general state of science compared with five years ago. Today, 52% of AAAS scientists say this is good time for science, down from 76% in 2009.

Scientists tend to be more positive, by comparison, when it comes to the state of their scientific specialty. Yet, here too, scientists today are less rosy in their assessments than in our previous survey. Some 62% of AAAS scientists say this is a good time for their specialty area, down 11 percentage points from 2009.

The drop since 2009 in views about the state of science occurred among AAAS scientists of all disciplines, those with a basic and applied research focus, and among those working in industry and those in academia. For more on scientists’ assessments of science and technology today and in comparison with other industrialized nations, see Chapter 4.

Effects of Science on Society 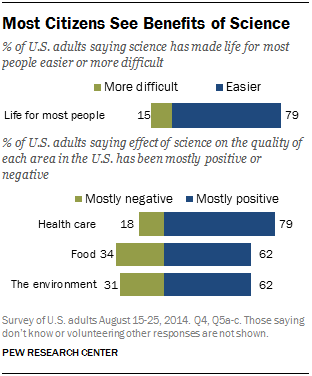 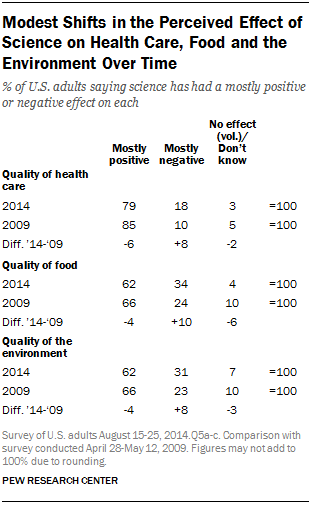 Despite increased political differences on assessments of climate change in recent years, two-thirds (66%) of Republicans and independents who lean toward the Republican Party say that the effect of science on the quality of the environment in the U.S. has been mostly positive, as do 61% of Democrats and independents who lean toward the Democratic Party. (A detailed analysis of the differences and similarities among those with different political views about science and technology topics will be issued later this year.) 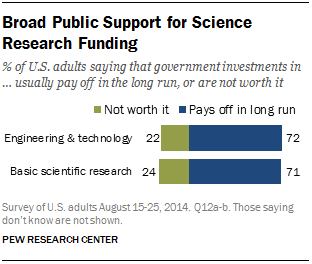 A solid majority of the public expresses support for government funding for science and technology. About seven-in-ten adults say that government investments in engineering and technology (72%) and in basic scientific research (71%) usually pay off in the long run. While support for funding is about the same as in 2009, negative views that each type of funding is “not worth it” have edged up (5 percentage points for engineering and technology and 6 points for basic science research). 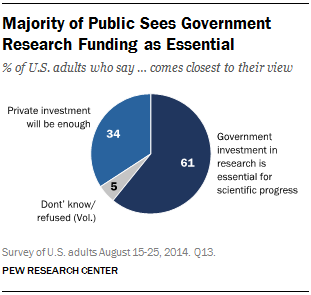 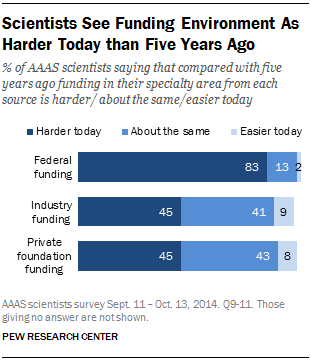 These findings come at a time when some leaders in the scientific community have raised concerns about adequate funding for science research.13 For instance, Francis Collins, head of the National Institutes of Health, recently argued that an Ebola vaccine probably would have been created “if we had not gone through our 10-year slide in research support” by the government.14 And, new articles in the Journal of the American Medical Association (JAMA) highlight the slowed U.S. investments in biomedical research and argue this puts the U.S. “at risk for losing its global scientific leadership and competitiveness.”15 The National Science Board’s biennial review of science and engineering indicators reports the total research and development (R&D) funding in the U.S., especially industry funding, “broke away from [its] long-term growth trend” during the Great Recession and that while funding recovered somewhat, “the deviation from the long-term trend is still discernible” as of 2011.16

Fully 83% of AAAS scientists say that getting government funding in their specialty area is harder today than it was five years ago, just 2% say getting federal funding is easier today and 13% say it is about the same. Some 45% of AAAS scientists also say it is harder to get research funding from industry sources or from private foundations today compared with five years ago.

Further, when asked to consider whether each of seven potential issues is a “serious problem for conducting high quality scientific research today” only one was selected by a majority of scientists: lack of funding for basic research. Some 88% of AAAS scientists report that lack of research funding hinders research today.

A majority of AAAS scientists identity funding as a serious problem for conducting research today, regardless of discipline, employment setting, or a basic or applied research focus in their own research.

For more on AAAS scientists’ views about funding, problems for conducting research and other issues in science today, see Chapter 4.

Next: Chapter 3: Attitudes and Beliefs on Science and Technology Topics
← Prev Page
Page1Page2You are reading page3Page4Page5Page6Page7
Next Page →

Why Pew Research Center is going deeper on science

5 key findings on what Americans and scientists think about science

U.S. Views of Technology and the Future