A large majority of Americans feel that religion is losing influence in public life, according to a 2019 Pew Research Center survey. While some say this is a good thing, many more view it as a negative development, reflecting the broad tendency of Americans to see religion as a positive force in society.

At the same time, U.S. adults are resoundingly clear in their belief that religious institutions should stay out of politics. Nearly two-thirds of Americans in the new survey say churches and other houses of worship should keep out of political matters, while 36% say they should express their views on day-to-day social and political questions. And three-quarters of the public expresses the view that churches should not come out in favor of one candidate over another during elections, in contrast with efforts by President Trump to roll back existing legal limits on houses of worship endorsing candidates.1 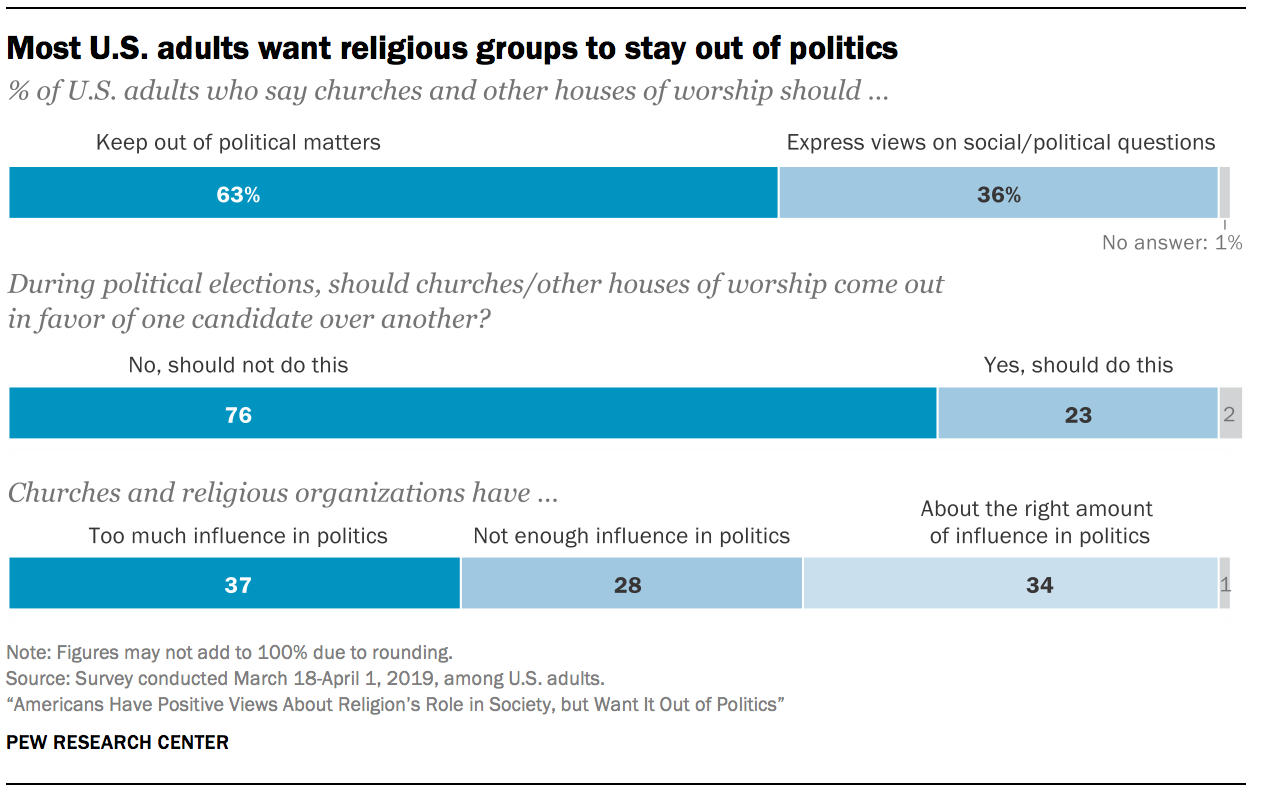 In addition, Americans are more likely to say that churches and other houses of worship currently have too much influence in politics (37%) rather than too little (28%), while the remaining one-third (34%) say religious groups’ current level of influence on politics is about right. 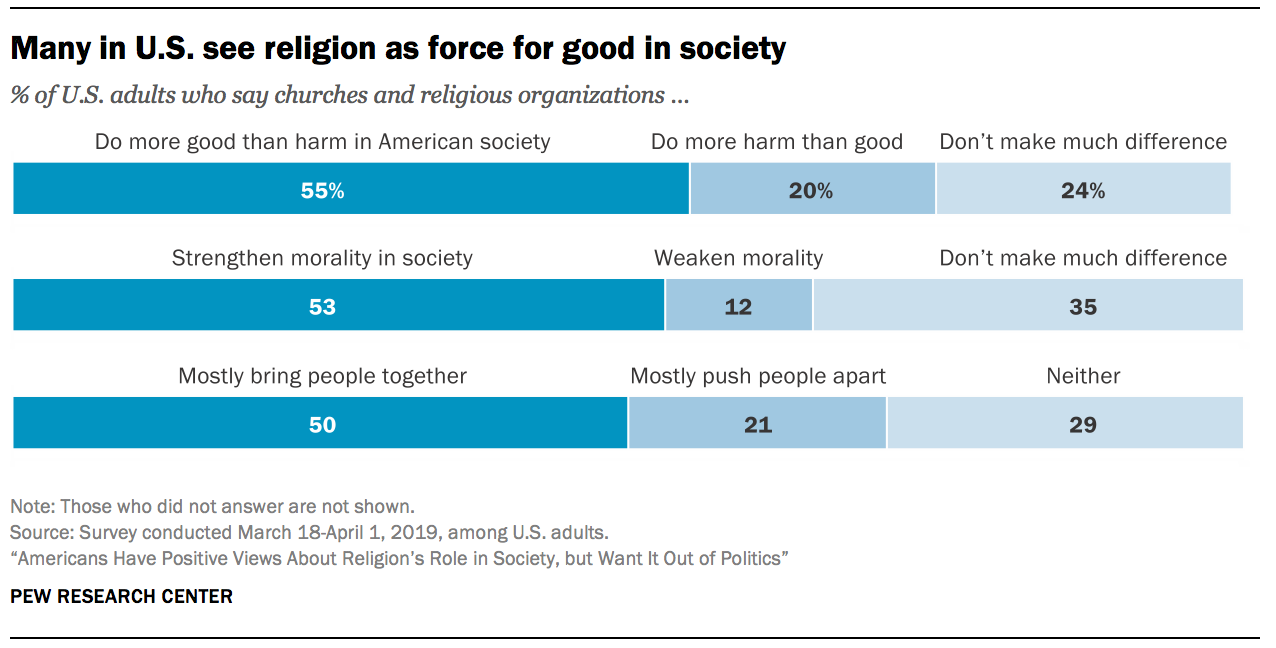 The survey also shows that roughly four-in-ten U.S. adults – including a majority of Christians – lament what they perceive as religion’s declining influence on American society, while fewer than two-in-ten say they think religion is losing influence in American life and that this is a good thing. In addition, roughly two-thirds of the public believes that religious leaders in general have high or very high ethical standards, and a larger share of Americans who attend religious services at least a few times a year say this about the clergy in their own congregations. Among these U.S. adults who attend religious services, majorities express at least “some” confidence in their clergy to provide useful guidance not only on clearly religious topics (such as how to interpret scripture) but also on other matters, such as parenting and personal finance (see Chapter 2). 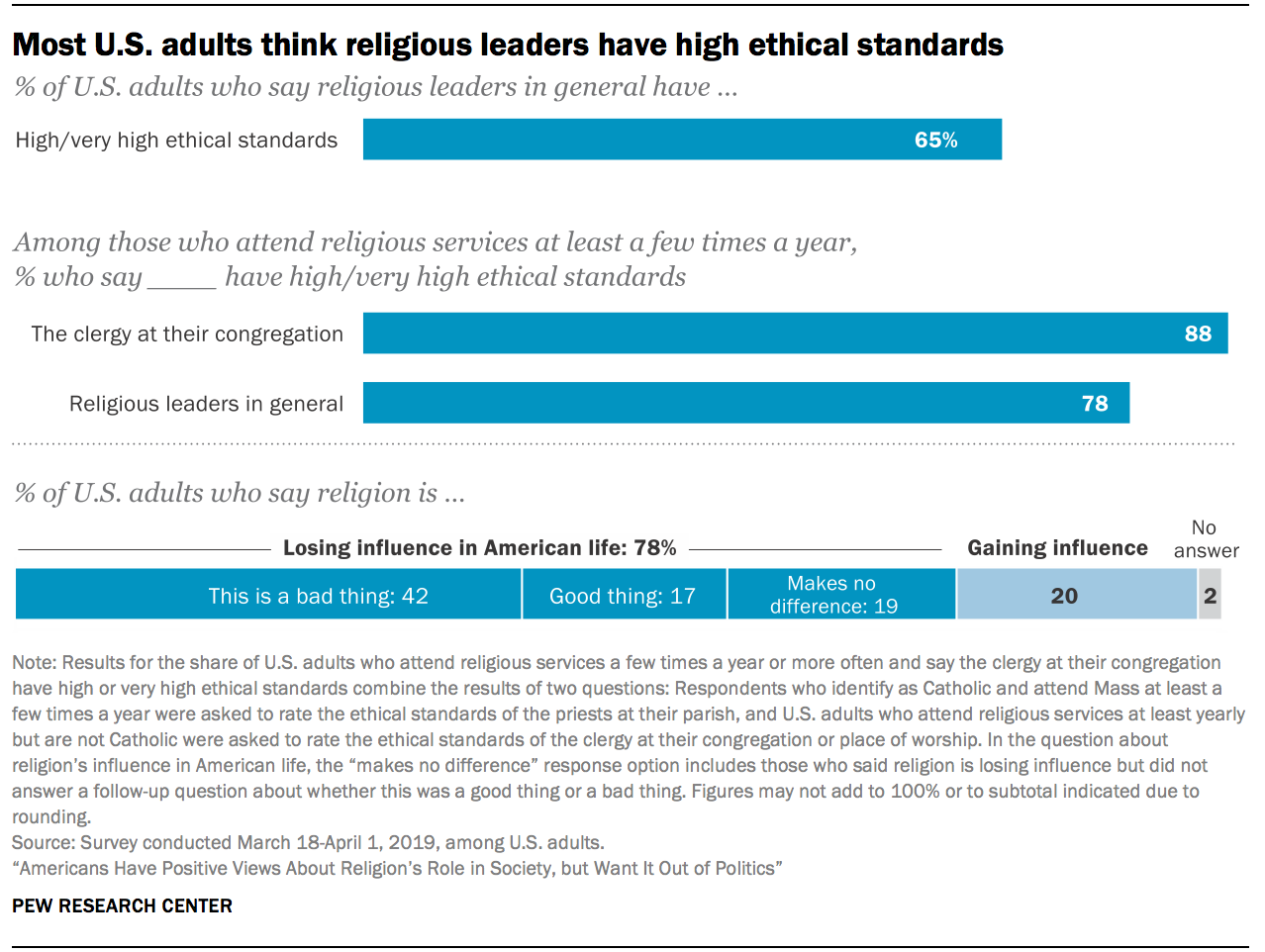 These are among the key findings from a nationally representative survey of 6,364 U.S. adults conducted online from March 18 to April 1, 2019, using Pew Research Center’s American Trends Panel. The margin of sampling error for the full sample is plus or minus 1.7 percentage points. Many of the questions in the survey were asked only of U.S. adults who attend religious services a few times a year or more often; results for that group have a margin of error of plus or minus 2.4 percentage points. 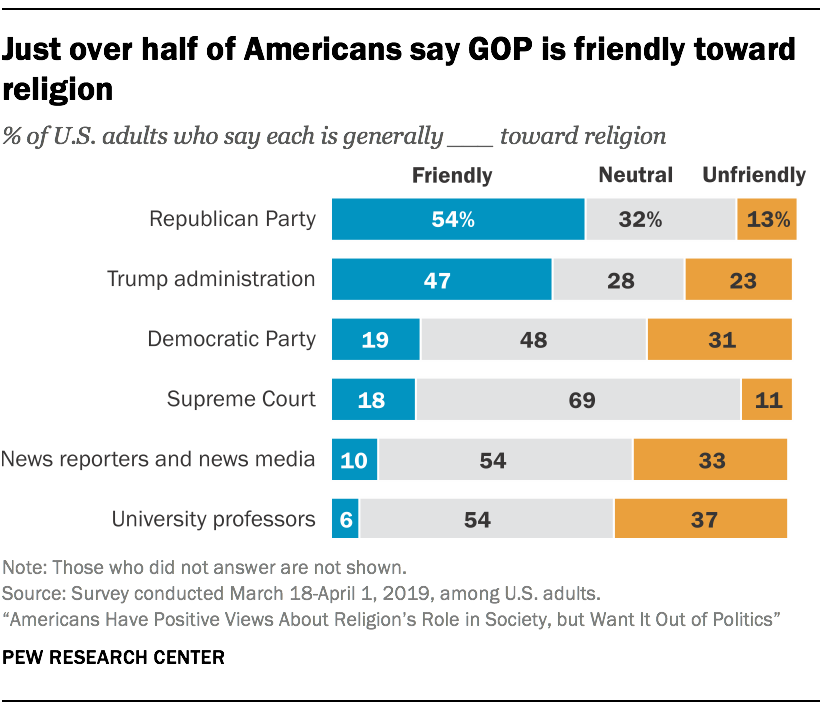 The survey, part of an ongoing effort by the Center to explore the role of trust, facts and democracy in American society, was designed to gauge the public’s views about many aspects of religion’s role in public life, as well as asking how much U.S. adults trust clergy to provide various kinds of guidance, what messages Americans receive from their clergy about other religious groups, how satisfied they are with the sermons they hear, how close they feel to their religious leaders, and whether they know – and share – the political views of the clergy in their houses of worship.

Equal shares say that reporters and the news media (54%) and university professors (54%) are neutral toward religion, and 48% say this about the Democratic Party. In each of these cases, however, Americans are considerably more likely to say these groups are unfriendly toward religion than to say they are friendly. For instance, more than one-third of the public (37%) says university professors are unfriendly to religion, while just 6% say professors are friendly to religion.

Partisan differences in views toward religion in public life 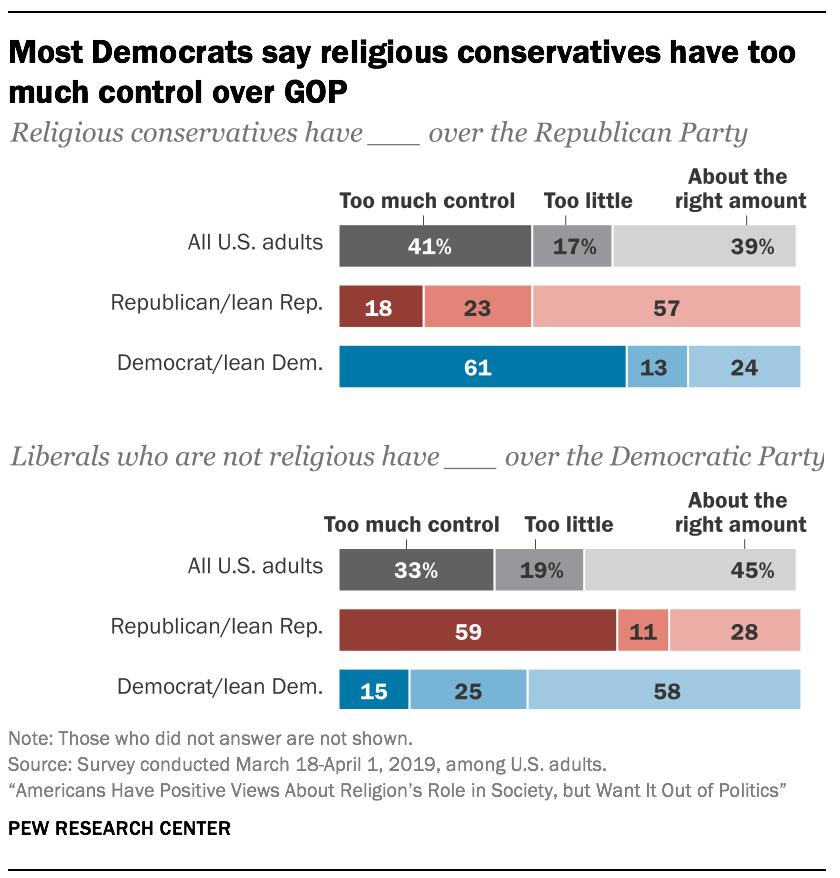 More broadly, Republicans and Democrats express very different opinions about religion’s impact on American public life. Seven-in-ten Republicans say churches and religious organizations do more good than harm in the U.S., and two-thirds say these institutions strengthen morality in American society and mostly bring people together (rather than push them apart). On all three of these measures, Democrats are less likely to share these positive views of religious organizations.2 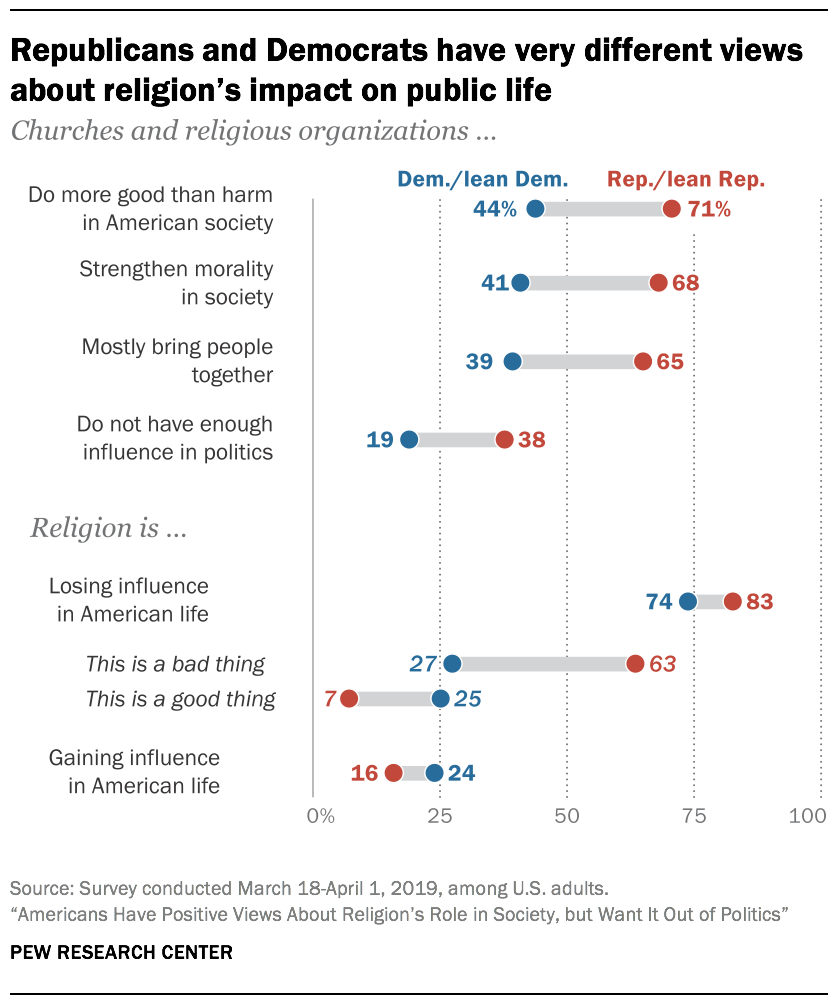 Furthermore, most Republicans say religion either has about the right amount of influence (44%) or not enough influence (38%) in the political sphere, while a slim majority of Democrats say that religion has too much influence in politics (54%). And although most Republicans and Democrats (including those who lean toward each party) agree that religion is losing influence in American life, Republicans are far more likely than Democrats to view this as a regrettable development (63% vs. 27%). There are about as many Democrats who say religion’s decline is a good thing (25%) as there are who say it is a bad thing (27%), with 22% of Democrats saying religion’s declining influence doesn’t make much difference either way.

Feelings about religion vary among Democrats based on race and ethnicity 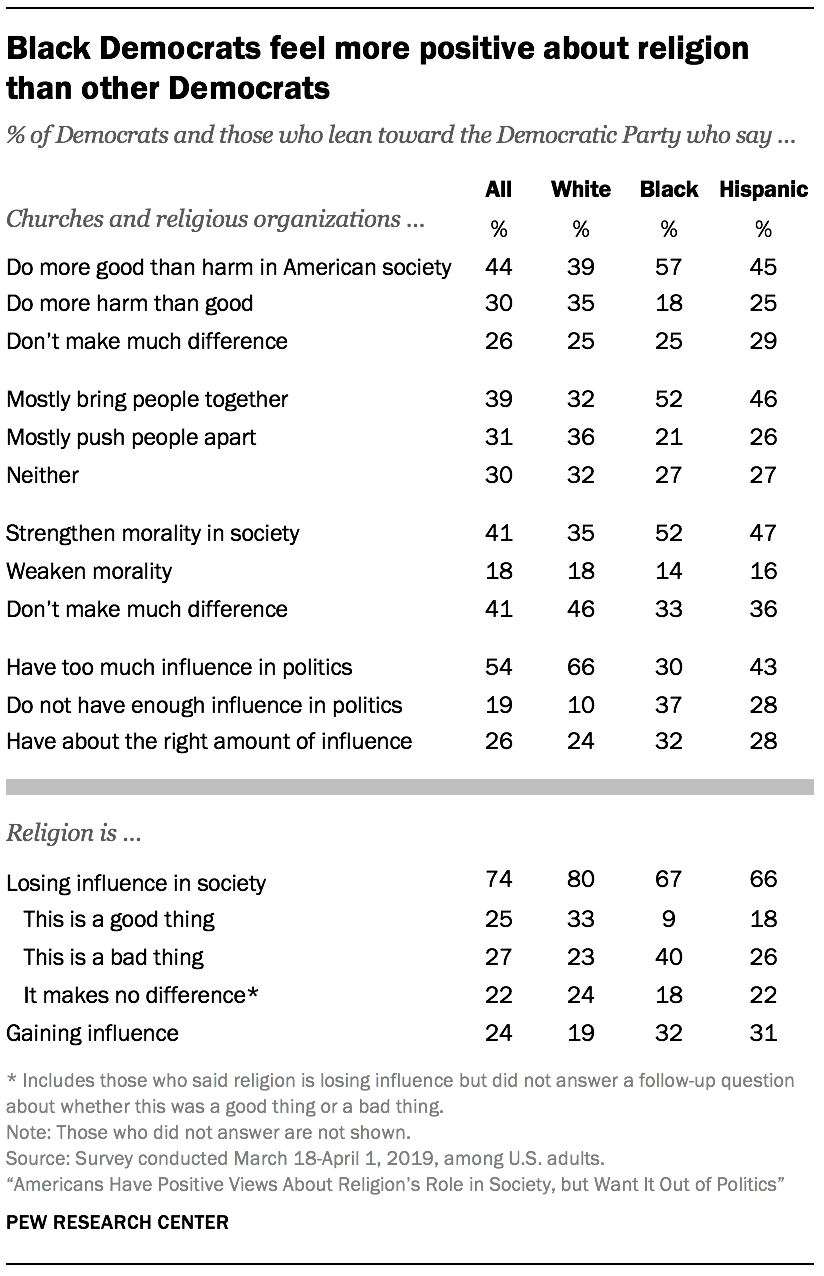 There are stark racial differences among Democrats and those who lean toward the Democratic Party in views on religion’s role in society: Black Democrats consistently express more positive views of religious institutions than do white Democrats. For example, half or more of black Democrats say churches and religious organizations do more good than harm in American society, mostly bring people together (rather than push them apart), and strengthen morality in society. White Democrats are substantially less inclined than black Democrats to hold these views. 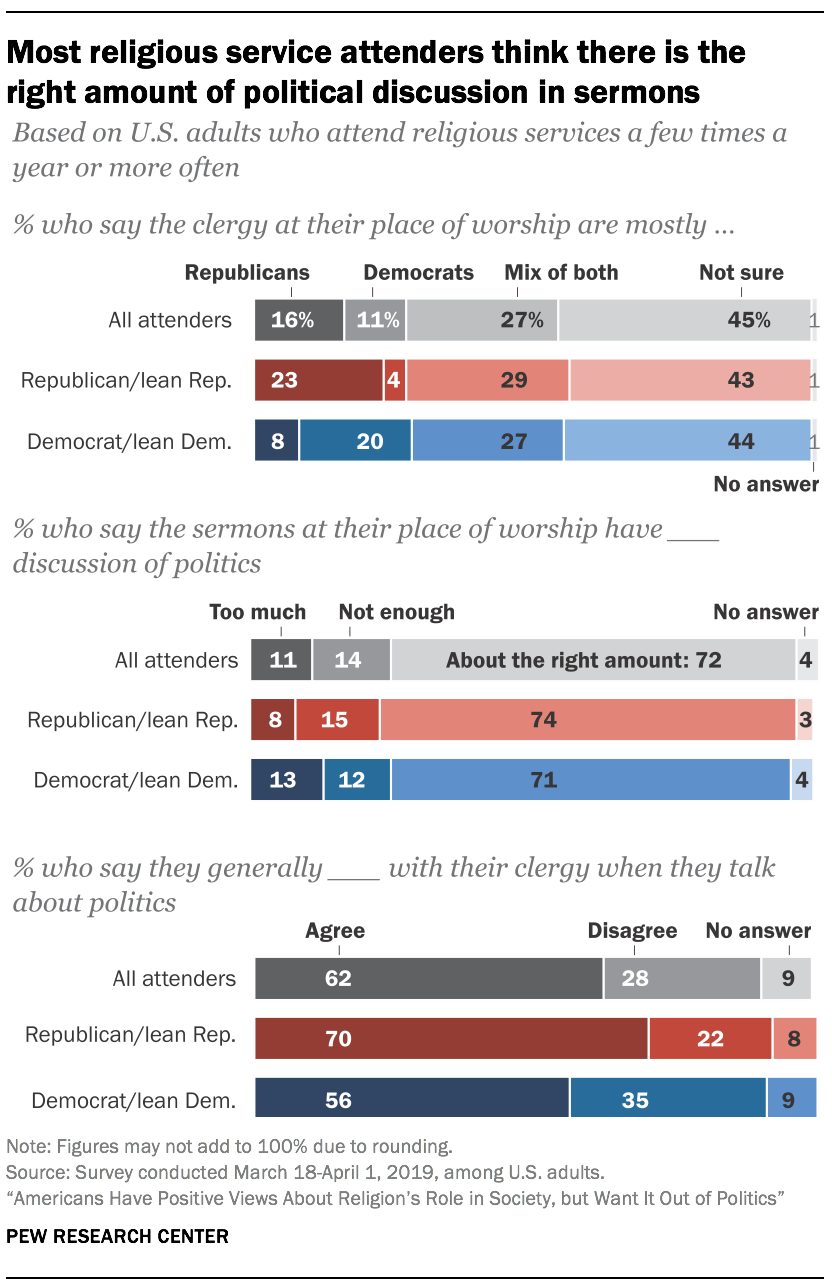 The survey also sought to gauge people’s perceptions about the politics of their clergy, finding that relatively few Americans say their clergy are united on one side of the partisan divide. In fact, many Americans who attend religious services at least a few times a year say they are unsure of the party affiliation of the clergy at their place of worship (45%), while about one-in-four say their clergy are a mix of both Republicans and Democrats (27%).4 When those who attend religious services think they know their leaders’ party affiliation, slightly more say their clergy are mostly Republicans (16%) than say they are mostly Democrats (11%). 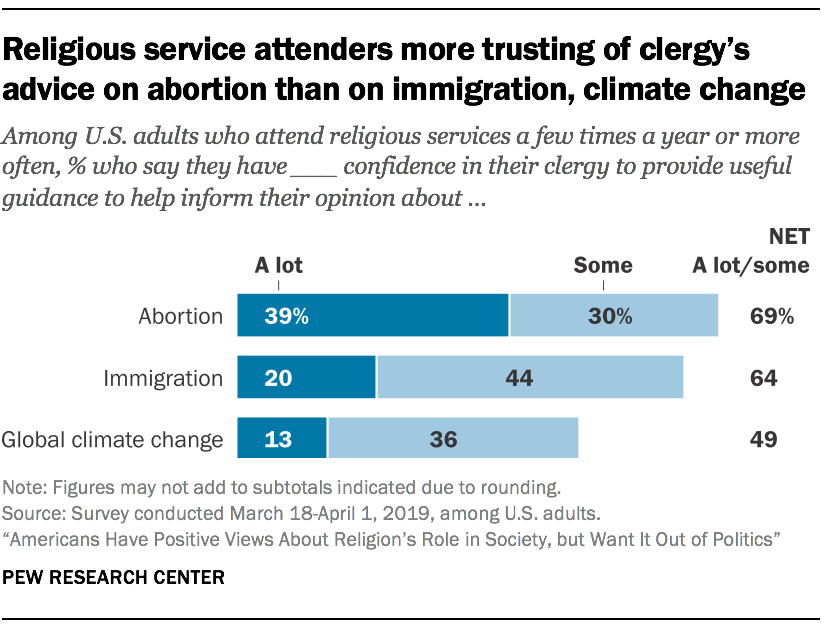 The survey asked those who attend religious services at least a few times a year the extent to which religious leaders help inform their opinion about three social and political issues: abortion, immigration and global climate change. Four-in-ten religious service attenders have a lot of confidence in their clergy to provide useful guidance to inform their opinion on abortion. Smaller shares have a lot of trust in their clergy’s guidance about immigration (20%) or global climate change (13%).

The remainder of this report examines the public’s views about religion in public life and religious leaders in further detail, including differences in opinions across religious groups. Chapter 1 looks at Americans’ views about religion in public life. Chapter 2 explores levels of confidence in clergy (and other clergy-related opinions) held by Americans who attend religious services at least a few times a year. And Chapter 3 looks at religion’s role in some of Americans’ interpersonal relationships, including levels of trust in religious and nonreligious people.

Next: 1. Many in U.S. see religious organizations as forces for good, but prefer them to stay out of politics
← Prev Page
You are reading page1Page2Page3Page4Page5Page6
Next Page →

Americans Have Positive Views About Religion's Role in Society, but Want It Out of Politics
1. Many in U.S. see religious organizations as forces for good, but prefer them to stay out of politics 2. Most congregants trust clergy to give advice about religious issues, fewer trust clergy on personal matters 3. Americans trust both religious and nonreligious people, but most rarely discuss religion with family or friends Acknowledgments Methodology